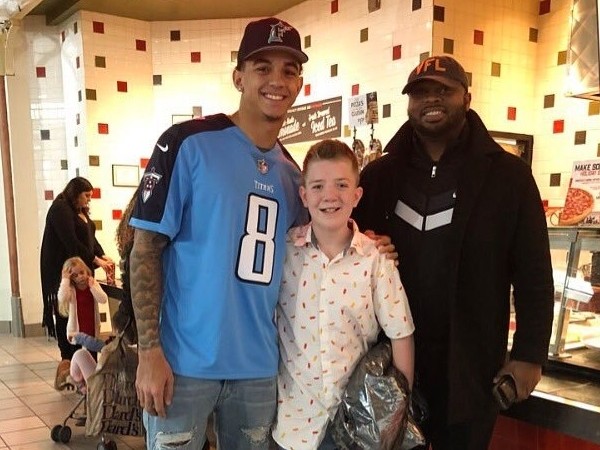 Video of 11-year-old Keaton Jones of Knoxville, Tennessee, tearfully questioning his bullies went viral over the weekend and elicited a heavy response from celebrities, including those from the Hip Hop community.

From Cardi B to Chris Brown, many prominent artists came to Jones’ defense, offering solidarity via social media.

I LOVE YOU BRO! Wanna encourage THE WORLD AND PEOPLE TO SHOW LOVE AND COMPASSION. this video made me wanna do harm to the people who picked on this kid, but then I realized that love works both ways. #FUCKBULLYING

The child even gained a lifelong friend in West Coast O.G. Snoop Dogg.

“Say lil Man U gotta friend in me for life hit me on dm so we can chop it up love is the only way to beat hate,” Snoop wrote in the caption of his repost of Jones’ video.

Say lil Man U gotta friend in me for life hit me on dm so we can chop it up love is the only way to beat hate ??☝?

Cardi B took direct aim at Jones’ bullies, writing “you not even a bully YOU A STRAIGHT UP PUSSY ASS PUNK ASS BITCH.”

Who ever goes to this boy school ,If you pick on him you not even a bully YOU A STRAIGHT UP PUSSY ASS PUNK ASS BITCH .Like how you pick on somebody who can’t defend them self ? THATS NOT GANGSTA ! If you a parent or somebody big sis or big bro show your kids this video and show them why they should not bully others !!??? ????????

T.I., Rihanna and Plies were among the other artists who responded to Jones’ video.

To answer your question Lil man… bullies are just cowards who are too weak to address the hurt,pain,&unhappiness in their own miserable lives so they take it out on great people like YOU!!! Just know that YOU ARE GREAT!!! Your differences make you the shit!!! Don't ever let anyone make you feel anything else. When it's all said & done… FU*K THEM!!!! You've got friends in US!!! Don't let their unhappiness get to you. Time has a way of showing bullies how shitty their lives really are. Just remember ALL THE THINGS THEY PICK ON YOU ABOUT MAKE YOU THE SHIT!!!! You're perfect just as you are. FU*K em!!!! Hit me if u need me Lil bro. #Salute

#KeatonJones Hero!!! Thank you young KING for inspiring us all who have been in your shoes at any capacity! If you have, or currently are going through any form of bullying, my heart and my prayers go out to you! Bullies…y'all corny!

Whoever This Courageous Young Man Is I Would Luv To Be Your Friend Champ If That's Ok With U.. If Someone Can Help Me Find Him I Would Luv 2 Send Him Something 4 Christmas ?…. #KidsShouldntHaveToFeelLikeDis? #Plies #AintNoMixtapeBih3 #CheckCallin #PurpleHeart? #FEMA #RanOffOnPlugTwice #RitzCarlton?

In his emotional video, Jones asks someone offscreen, “Just out of curiosity, why do they bully? What’s the point of it?” He then details the bullying he’s suffered at the hands of other children at his school.

“They make fun of my nose,” Jones said in the video. “They call me ugly. They say I have no friends.”

A GoFundMe campaign was launched for Jones and his family, raising close to $60,000 as of December 11.

The defense from Hip Hop and many other celebrities took a twist when Jones’ family was possibly exposed for being racist. A photo collage making the rounds online allegedly features questionable commentary and Confederate flag-flaunting photos from the boy’s mother, Kimberly Jones.

Keaton Jones MOM is a next level racist who's posted in many offensive and non remorseful comments towards black people, so how is she preaching about bullying when she herself is a bully ??? lmao people are funny pic.twitter.com/bTnF7BFDGr