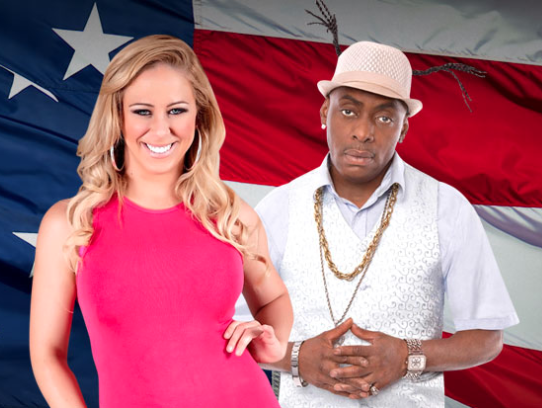 Los Angeles, CA – Coolio is preparing to step into the world of politics.

The 54-year-old Compton native, who won a Grammy for his 1995 hit “Gangsta’s Paradise,” has plans to run as Vice President in 2020 alongside Cherie DeVille, an adult film star who wants to “Make America Fucking Awesome Again.”

What at first appeared to be a publicity stunt of sorts now seems to be a legitimate venture that both DeVille and Coolio are dedicating themselves to with gusto.

In an attempt to legitimize their political efforts, the pair launched a new website — PornstarForPresident.com — which details their stances on a variety of key issues including healthcare, immigration and marijuana legalization.

“DeVille Coolio 2020 is the answer to the mess our country is in,” the website states. “8 months into Trump’s presidency and we are on the verge of nuclear war, and there are nazi’s marching in the streets, it’s time for change.”

DeVille and Coolio recently spoke with KESQ, a local CBS affiliate for the Coachella Valley, about their political aspirations.

“If we’re pulling away from electing only politicians for our higher offices, then I think that as a very small celebrity in my own right I would be a good choice for the American people and, at this point, for the world at large,” DeVille said.

While he didn’t fully divulge his political beliefs, Coolio did admit that he’s a believer in the so-called Deep State, a notion that many journalists and scholars have labeled as a conspiracy theory.

The running mates join a long list of celebrities who have already flirted with the idea of running for office in 2020, including Kanye West, Dwayne “The Rock” Johnson and Dallas Mavericks owner Mark Cuban.