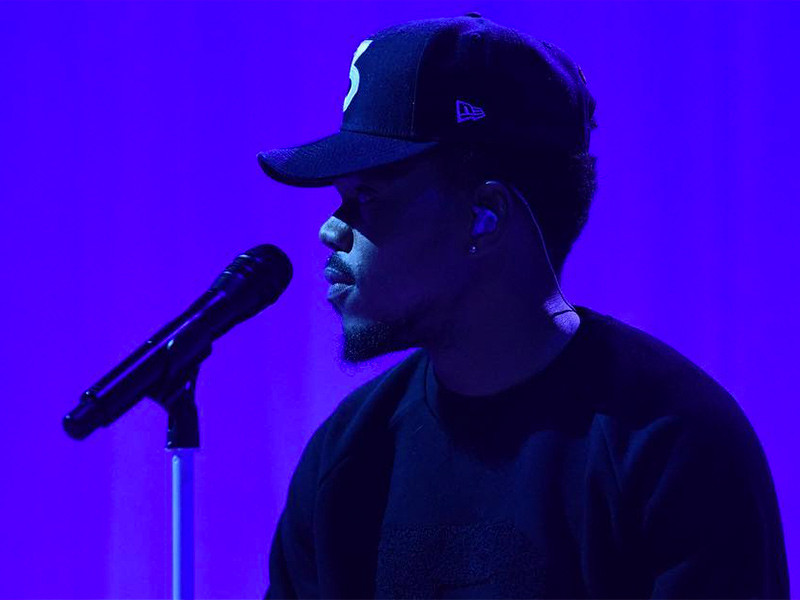 Chance The Rapper debuted a song “so new that it doesn’t even have a title yet” on The Late Show With Stephen Colbert on Monday night (September 25).

The Chicago rapper was both an interviewee and a musical guest on Monday’s show, and explained to the host why he chose to play the brand new track. “I was going to do ‘Grown Ass Kid,’ which is an unreleased song from Coloring Book, and then I called you guys Saturday and said I can’t do ‘Grown Ass Kid’ anymore. For reasons I don’t really wanna to talk about. Basically we had to come up with the song in a matter of days and I wanted to do something fresh.”

Chance reminded Colbert that he has a  history of playing brand new music on the Late Show, referencing his performance of “Angels,” and adding, “So I said why not do a new song for you guys here tonight? I wrote this two days ago.”

There are even moments where listeners can tell how new the song is, with Chance briefly screwing up the lyrics at around the three-minute mark, saying “had” instead of “heard” and then correcting himself.

The track, which features Toronto singer-songwriter Daniel Caesar, falls into the “Down-Tempo Nostalgic And Sentimental” category of Chance’s music, with heavy gospel overtones on the chorus.

Chance also spoke about a few other topics, such as working together on their performance at the Emmys, and whether or not Chance has any political ambitions.

In his own words: “Not at all. I like to make the separation between the two things. I do not like politics. I think government is necessary and should always be a fluid thing that’s changing. Politics is really fast and it’s about popularity and strategy but it’s not about … it doesn’t make the same change that legislation makes.”

“So I try not to get caught up in politics or any, you know, entertaining things. I try to keep my eyes focused on things that really affect us systemically, which is where the law is. So, to a certain degree I have to be up to date on what’s going on politically, but I try not to let it faze me.”