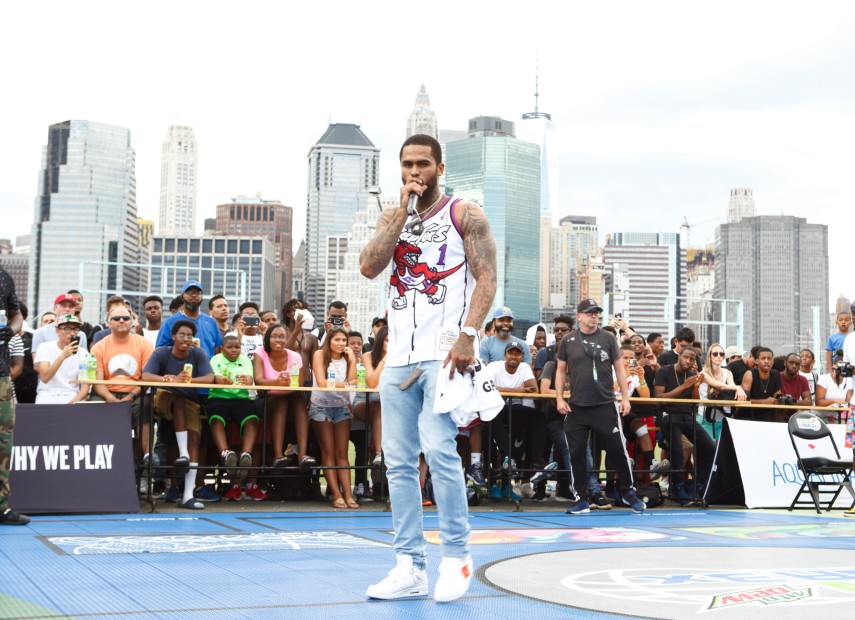 Brooklyn, NY – BET weekend in Los Angeles means artists from all over the world come to celebrate the festivities. Meanwhile, on Sunday (June 25), Harlem MC Dave East pulled a bi-coastal no-look pass and traveled back to his hometown for the DEW NBA 3X at Brooklyn Bridge Park.

2017 marks the second year of the DEW NBA 3X elite 3×3 basketball competition, which highlight preselected men’s and women’s teams made up of FIBA’s top 100 globally ranked players. Winner of the six-city tour will qualify to compete in the 2018 USA Basketball 3×3 National Tournament.

Hopping on a call immediately following his performance, the Kiara Chanel rapper revealed it was his first time performing on a basketball court.

Speaking on the recent NBA Draft, Dave admits the only person he was familiar with this year is Lonzo Ball, who recently fulfilled his outspoken father’s wishes and was aquired by the Los Angeles Lakers.

Dave expands, “I know he from Cali and all that. That’s hometown love right there. He seems like somebody that can help that program over there.”

Speaking of basketball, a photo on the Internet surfaced of East and reigning NBA champ, Kevin Durant posted in the studio, leading to many wondering if the two were working on new music together. The former b-ball star in his own rite quickly dispels those rumors.

We Talked About All This Shit In 10th Grade. Real ? @brock_mills #PARANOIA

“No, Kevin ain’t making no music, man,” Dave clarifies. “We did that before. Before all of this, he was making beats for me — my first or second mixtape. He came through to just hear my new… the Paranoia tape I’m about to put out. He came to hear that.”

Never Know Who Might Pop Up To Hear #PARANOIA ? @brock_mills

Since his 2014 breakthrough year — which has apexed into him being a part of both Nas’ Mass Appeal and the storied Def Jam label, many have christened East (born David Brewster) for being the torchbearer to bring back traditional Hip Hop back to the days of its commercial acceptance. Speaking on the upcoming project, he reveals that its length will be something longstanding Hip Hop heads are accustomed to.

“It’s dropping in July. I can’t give you the exact time,” he admits. “It’s like ten joints- all original, of course. It’s my first release with Def Jam.”

Without giving away too much, Dave reveals one guest feature we can look forward to.

“Yeah, I got features on there. You trying to get all the exclusives,” he continued with a laugh. “I’ll tell you one. Young Jeezy. I got Jeezy on there. I got the uncle on there with me. I got the freedom over there to do me. I’m in a position where I got a lot of other things going on besides the music, so they really in my corner with everything else. I think I made a good decision signing with them.”

Rap stars these days are expected to have multiple eggs for their baskets and modeling is one of the other endeavors Dave is pursuing. An endeavor he admits comes second nature given his 6’6″ frame.

“Yeah, I’m modeling,” he explains. “I actually had a sit-down and a talk with a few agencies, so we putting that together now. I got a couple clothing lines. Fear of God is one, for sure. I’m about to do some things with them. But it’s a few different lines that’s about to have me modeling. If I ever put that blog out, soon as it hits, it’s lit.”

Dave adds, “It’s regular, I do that every day, I just got eyes watching me with cameras, and that’s becoming normal, too.”

Proceeding with caution, DX asked Dave about his relationship with Prodigy of Mobb Deep, who passed away at the age of 42 this past month (June 20).

“I ain’t gon’ front. That was big bro. Me and him had a good relationship. I actually met him in Queensbridge. I used to get out there a lot when I was younger. Me and him actually just did two records not too long ago. I had a record on his new project he was about to put out. He got a record with me. So, that was a shocker. I been knew about the sickle cell situation, but I seen him, he was in the gym and all that. It kind of was like out of blue. You never really expect nobody to die like that. That really came out of left field.”

And fans can expect a Harlem/Queensbridge collaboration, sooner than later.

“I got a record with him, I’m going to get it mixed and all that. And put that out so everybody can hear me and him together.”