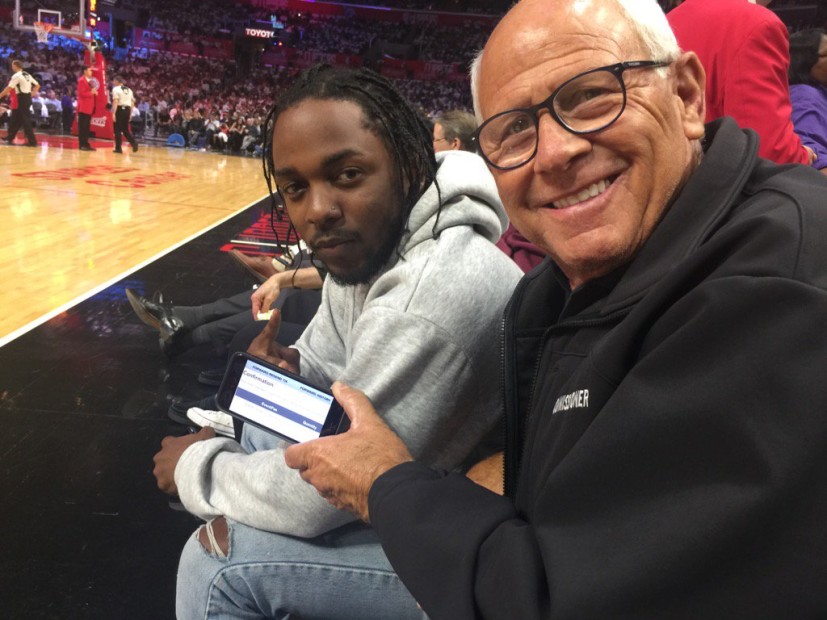 Los Angeles, CA – “[This guy] helped me navigate the @Staples Center website to buy tix for @kendricklamar concert in August,” reads a tweet from Los Angeles Police Commissioner Steve Soboroff, which was attached to a picture of him and K.Dot seated courtside at the Los Angeles Clippers and Utah Jazz game Tuesday night (April 25).

It’s hard to believe that Soboroff wouldn’t know that he’s sitting next to the man who has the #1 album in the country right now, but that didn’t stop a few confused fans from failing to catch on to the joke.

Someone should tell the LA Police Commissioner that IS #kendricklamar lol

Soboroff later spoke with TMZ Sports to clarify his joke and to explain his ideas about creating healthy relationships between police and the community.

“[Kendrick] expresses through his art form his feelings, and I respect that, in Los Angeles, and I think he respects — or I hope he would respect — how seriously we take community policing and understanding people’s views. We can’t police our way out of these issues. These are issues that have to be brought together by like what Maya Angelou says ‘thinking about what we have in common’ … I think that Kendrick and Jay Z and Rihanna and the lucky people I’ve sat next to at these games, everybody that I’ve sat next to certainly appreciates that and every officer that I know does too.”

He also spoke about his long-time connection with K.Dot and his crew.

“I consider him a friend and I think he considers me a friend. And I know his manager and some of the other folks around him consider me a friend. I’ve been there for a long time and done a lot of things to help in the community and I want to keep that up.”

Since Kung Fu Kenny helped Soboroff buy tickets to his DAMN. Tour, perhaps we’ll catch him turning up and singing along to “Alright” with a can of Pepsi. The trek kicks off July 12 in Phoenix, Arizona and wraps up in Los Angeles on August 6. Travis Scott and D.R.A.M. are slated to join Dot on the tour.