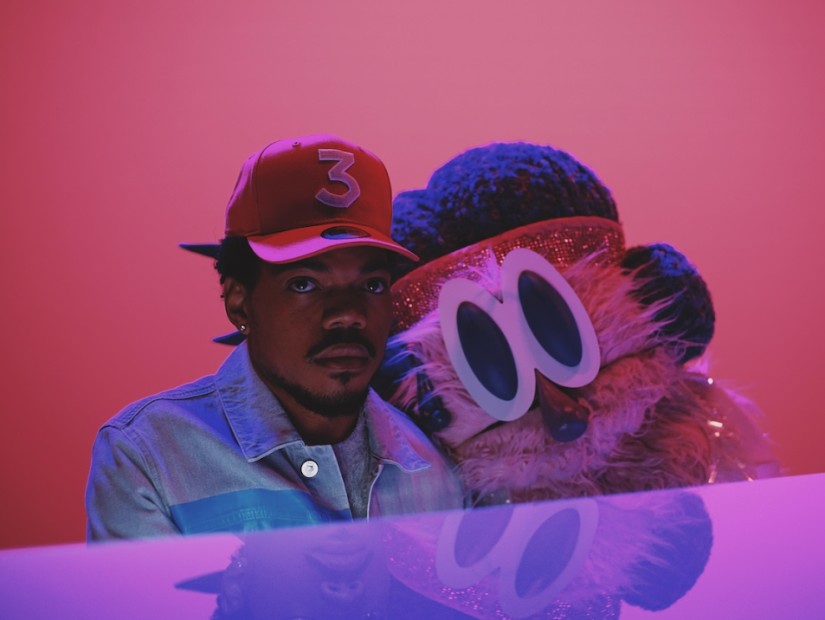 San Diego, Ca – It used to be that getting signed to a major record label meant you were on. Chance The Rapper has disrupted that mindset with his success and is potentially ushering in a new ethos for upcoming artists: you don’t need a label.

On Monday (April 24), the “No Problems” rapper performed at San Diego’s Valley View Casino for his Be Encouraged Tour and basically clowned eight of the most popular music labels by reconstructing their logos into something more comical and crude.

During Chano’s production he was backed by a giant video screen that flashed the new label signage. Sony turned into Phony, Def Jam Recordings to Don’t Join Recordings, Aftermath Entertainment to Can’t Do Math Entertainment, Warner Music Group to Wiener Music Group, Virgin to Villain, Motown to No Crown, Epic to Edick and Universal to Undiverse.

All this while tauntingly showing off the three Grammys he won this year for Best New Artist, Best New Album for Coloring Book and Best Performance for “No Problem,” which featured his buddies 2 Chainz and Lil Wayne. Those are three awards Chance wouldn’t have been able to win if the Recording Academy hadn’t changed its rules to allow streaming-only titles to be counted for nomination. Previously, artists would have had to put their work up for sale, which is something the Chicago musician has never felt compelled to do.

Chance has become known for his staunch belief in freedom from record labels and has found much success in it. The 24-year-old was named one of TIME’s 100 Most Influential People this year, and in the magazine’s blurb, fellow Chi-town rapper Common wrote, “I’m glad Chance followed his dreams. I hope he always does.”

But Lil Chano’s trek to independent success hasn’t happened without stark criticism. Many have questioned how Chance got to be so successful. Doubters have incessantly called him an industry plant, pointing at his father’s ties to the Obama family and also questioned his relationship with Apple Music and Jimmy Iovine. Some astute fans have pointed out that Iovine’s Interscope Records wasn’t included in the lineup of music labels he clowned.

Back in March, Chance disclosed on Twitter the extent of his relationship with Apple, who doled out half a million dollars for exclusive release rights to Coloring Book.

I never felt the need to correct folks on my relationship with @apple but now that more people have tried to discredit my independence..

I wanna clear things up. @apple gave me half a mil and a commercial to post Coloring Book exclusively on applemusic for 2 weeks https://t.co/dMWwptrHHH

That was the extent of my deal, after 2 weeks it was on SoundCloud for free. I needed the money and they're all good people over there https://t.co/5kIhv0YaKS

Despite the disclosure, some are still doubtful of Chance’s “true” indie status. Perhaps his astute business moves will make doing independent music your own way the new normal, just as long as you still have your creative freedom and don’t relinquish your publishing to a large corporation. Only time will tell.

The Be Encouraged Tour is slated to continue throughout the rest of this year, wrapping up October 3 at the Hollywood Bowl in Los Angeles.