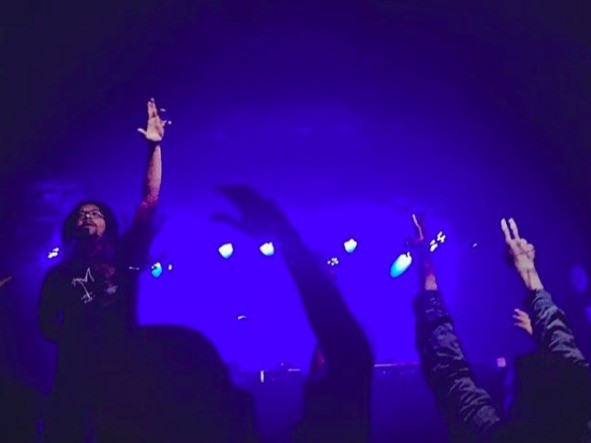 Get Ready For A Brand New Dr. Octagon Album

Although Dan The Automator alluded to fresh Dr. Octagon material being finished in an interview with HipHopDX last week, the celebrated producer took it a step further on Saturday (April 22) night and confirmed an entirely new Dr. Octagon album was finished. While performing at Denver’s Cervantes Masterpiece Ballroom alongside fellow Dr. Octagon member DJ Qbert, he stopped to ask the audience, “Can you guys keep a secret?” before making the announcement. Mr. Lif, who just happened to be in town with Thievery Corporation, jumped on the mic as well to talk about the album’s significance.

“Brand new Dr. Octagon,” Lif said. “You know what? I’m about to get misty. I’ve gotta tell y’all how much that Dr. Octagon record meant to me. First of all, that’s when I first came into contact with the work of Dan The Automator and my homeboy Qbert … that shit blew my mind.

“To be here years later and know there’s brand new Dr. Octagon coming out,” he added. “Not to mention Kool Keith is one of my favorite MCs of all time — slept on in some cases, but he’s one of the most influential MCs to ever bless a microphone.”

I ❤️ Denver! @dan_the_a and @therealmrlif killed it + that sacred energy in Colorado made me feel like I was skratching in a beautiful dream! ???Afterwards, I had the nerd out session and kut it up w my boy @chriskarnsmusic at his dope crib!? Thank you god!??

Comprised of Kool Keith, Qbert and, of course, Dan The Automator, Dr. Octagon released one album in 1996, Dr. Octagonecologyst, to critical acclaim, a coveted project considered a classic by most Hip Hop aficionados. On May 19, the Get On Down record label plans to release a vinyl reissue of Dr. Octagonecologyst, which includes 28-tracks, five previously unreleased cuts, three vinyl records, an octagonal box, and a 40-page booklet written by author Brian Coleman. Check out the video and Qbert’s Instagram post above, and pre-order the reissue here.