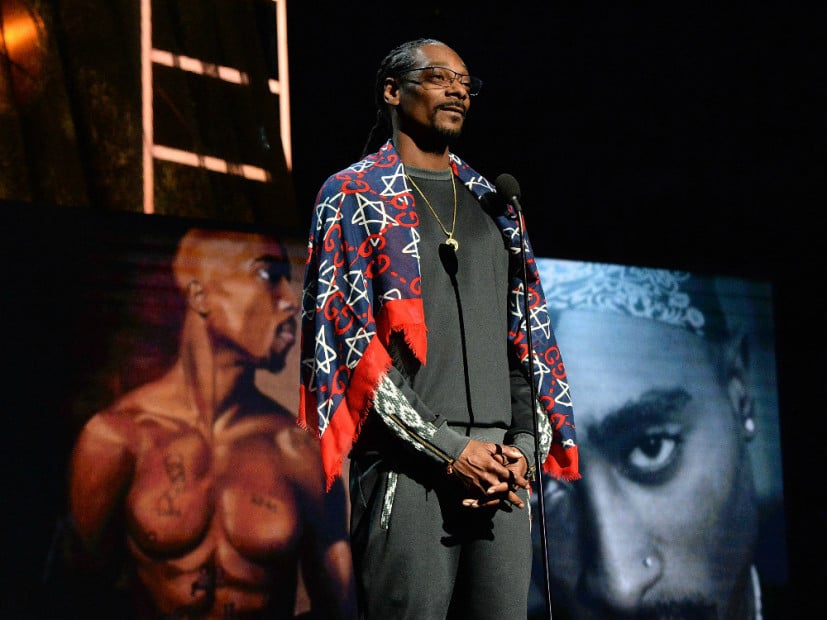 Brooklyn, NY – Tupac is officially a member of the Rock and Roll Hall of Fame as of Friday (April 7) after he was posthumously inducted during the ceremony held at Brooklyn’s Barclays Center.

Snoop Dogg handled the honor and reflected on his friendship with the West Coast icon as he delivered his speech. From their first meeting to the day Tupac died, The Doggfather expressed the importance of remembering his humane side.

“While many remember him now as some kind of thugged out superhero, Tupac really was only good and he represented through his music like no one before,” he said, according to a transcript from Rolling Stone. “It’s the fact that he never shied away from it. He wore it like a badge of honor. With an unapologetic voice, Pac embraced those contradictions that proved we ain’t just a character out of someone else’s story book. To be human is to be many things at once. Strong and bold. Hard headed and intellectual. Courageous and afraid. Loving and vengeful. Revolutionary and – oh, yeah I’m getting fucked up.”

Snoop shared what it was like to make music with Tupac. The two were labelmates on Suge Knight’s Death Row Records with Dr. Dre. Although the label’s legacy will forever be synonymous with controversy, the Long Beach legend explains what the team dynamics were like, even revealing Suge sent them parasailing in South America “to get away from all the drama.”

“I told Suge Knight, I said, ‘Suge get Pac out of prison and have him come join our team at Death Row Records,'” Snoop recalls. “He never had a team before. It was always just him. Now, with us it was like he joined the Lakers. Dre was the coach and me and Pac were the stars on the court making history every which side. We were young, rich, and rock stars but we were also young men black men with targets on our back. We were catching cases simultaneously. That’s why when we got together we really were two of America’s most wanted. He had just gotten out of jail. I had just beat my case. I get a white Rolls Royce with that creamy white interior and Pac, he went out and bought a black one with the same thing.”

Snoop honors Tupac's mom, who comforted him in the aftermath of Pac's death #RockHall2017 pic.twitter.com/ZlTeqKPwDv

He also paid tribute to Tupac’s mother, Afeni Shakur, who comforted him after Tupac’s death in 1996 at the age of 25. Ms. Shakur passed away in May of last year, but her son forever immortalized her in his song “Dear Mama.”

“Memories of Ms. Shakur are embedded in my mind,” Snoop said. “Right after I heard Tupac got shot I immediately flew to Vegas. I was so weak I damn near fell over and his mom came over to me and she grabbed me and she held up and she said, ‘Baby, you to to be strong.’ I went and sat next to him and I whispered to him telling him I love him and to hold on and he was going to be OK and even in that moment his mom was thinking more about me than herself and showed me how to love strongly. I mean it was amazing that his momma was so strong and loved so hard.”

The event then turned into an honorary performance where Alicia Keys performed “Changes,” “I Ain’t Mad at Cha,” “Dear Mama” and “Ambitionz As a Ridah” then YG joined Snoop for a rendition of “2 of Amerikaz Most Wanted.” Treach performed “Hail Mary” and T.I. paid his dues with “Keep Ya Head Up” while dressed in a bandana and leather vest.

See some of the performances below and read Snoop Dogg’s entire speech at Rolling Stone.

That's just the way it is, things will never be the same ? @aliciakeys honoring @2pac at Rock & Roll Hall of Fame Inductee Ceremony #RRHOF2017 (I have the same birthday ? as Tupac!)

.@SnoopDogg and @YG pay tribute to Tupac with '2 of Amerikaz Most Wanted' live at the @RockHall. #RockHall2017 #CongratsTupac pic.twitter.com/NZZ7bxXvnS

T.I. performing "Keep Ya Head Up" for the Tupac induction #RockHall2017 pic.twitter.com/uneh3QwceS