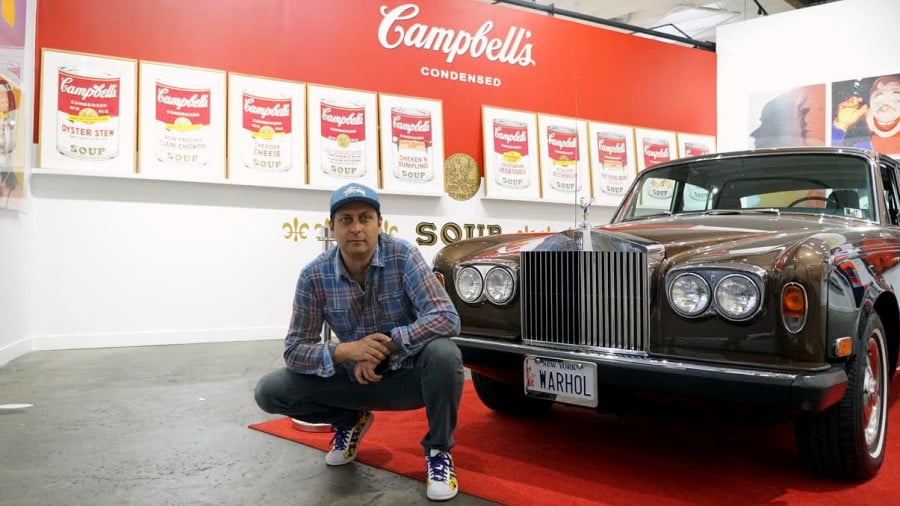 Santa Monica, CA – Andy Warhol is one of the most iconic artists to date. You may recognize his signature Marilyn Monroe piece (above), but he also was heavily involved in Hip Hop and its culture. There’s no doubt if he was with us today, his celebrity stature might be on par with the Kardashians or Beyonce.

It was a lovely Sunday late afternoon, one where Los Angeles could not decide between sunshine or rain. Through various social media posts and word of mouth, it was quickly realized that the Andy Warhol: Revisited exhibit was a must-see.

The owner of the #RevolverGallery with #AndyWarhol's 1974 Rolls Royce Silver Shadow ?

Typically closed on Sundays, HipHopDX had the pleasure of meeting Ron Rivlin, the owner of the Revolver Gallery, on his day off (family day). The exclusive tour started off with the 1974 Rolls Royce Silver Shadow Andy Warhol used to (not) drive. He had drivers. The car has been ridden by Jackie Kennedy, and is now in the hands of Ron, who recently took it for a smooth sail up PCH.

This wasn’t just any art gallery, this one of a kind. Opening its doors on February 14, the 30th anniversary of Andy’s untimely death, the goal was to somehow see all 200 pieces of art in rotation. When asked why Ron decided to make this exhibit free, he simply responded he didn’t need to charge. This was the man who founded and is the CEO of six different companies.

In catching up with Ron, it was interesting to see how Hip Hop helped him become a huge art curator. In fact, along the way, he even pulled out Jay Z’s contact in his iPhone.

Ron’s 20 years in the music industry started when he was a promoter in his hometown of Toronto and Montreal. “I booked Del the Funky Homosapien, Domino, The Jungle Brothers, De La Soul. . . all those guys came to my parties.”

Speaking on how this art gallery came to be, he states, “I lost everything in this big show I did in Montreal, because of a well-known gang. After I moved out here, to the Santa Monica Youth Hostel, to get away from everything.”

When asked to elaborate on the gang, Ron said he was unable to disclose any details.

Instead, he gives us a positive, heartwarming story.

“I booked Biz Markie for my last party as a promoter in Montreal, and the show got canceled. But I gave the Biz the whole fee, even though I should have just given him half. His manager Monte called me and said, “Man, that’s so cool you gave the whole fee. We didn’t expect that.’

So he said, ‘If we can help you in any way, if you have problems in Montreal, let us know.’ So I called him, and I said, ‘Listen, can I help find you and Biz gigs?’ He said, ‘For sure, Ron. I’ll put you in touch with DJ Jazzy Jeff and Big Daddy Kane.’ He made calls right away and hooked me up with Jazz and Kane. And then I got Dougie Fresh.”

Shortly after, Ron flew out to New York to meet with Def Jam Records. There, he got Run DMC and Slick Rick, because “they weren’t getting booked. At the time, they were kind of washed up on their roster.” Ironic, as both are now legends in the game.

“And then Eminem released his first album, and Hip Hop became Pop.”

Other artists on his resume include De La Soul, Method Man and Redman, DJ Kool, Busta Rhymes, Eric B and Rakim, among others. The remainder of the time was spent telling stories of some the fondest memories from back in the day.

DX asked if Hip Hop was a huge component of his life, and he responded, “It was back then, not anymore. Hip Hop started off very organically, where managers were like, the closest person to the artists. It would be like the brothers. . .  like Mos Def. That’s the perfect example.” He has repped Mos Def as well.

Once Hip Hop turned corporate, he was out. “On my own accord, I was done.” Instead, he turned to the EDM artists, who were making million dollars a year. That’s how this all came to be: all the money saved.

“Now I have a 15 million dollar collection. I started broke in a Youth Hostel, 19 years ago. A lot of people gave me a chance, and I did good for the artist. I double the artist’s rates because I introduced to a different audience. I wasn’t the Hip Hop promoter renting out a space, where there isn’t much money to be made. I went to more of the festival promoters, that would pay triple the money. So that’s where I had my success.”

It seems EDM is still his preference of choice, as he actually discovered DJ duo Infected Mushroom. Now, this art gallery is his passion. Be sure to visit and book your reservations online. You won’t regret it.