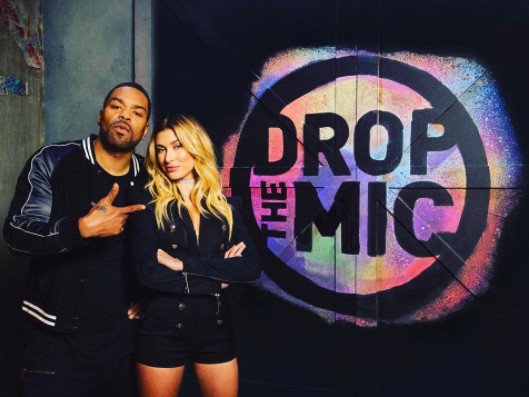 Wu-Tang Clan pioneer Method Man has been tapped to host a new TBS series, Drop The Mic, a spin-off of James Corden’s Carpool Karaoke.  Drop the Mic is already a viral, digital success as an ongoing popular segment on The Late Late Show with James Corden. The newly hatched version enlists entertainers from all over the world to engage in good old-fashioned rap battles, and finds Mr. Meth and model Hailey Baldwin helming the event.

Yes!!! Over the moon to announce our the hosts of our new show DROP THE MIC ….the brilliant @methodmanofficial and @haileybaldwin Coming to TBS on May 2nd

The format pits four celebrities from various segments of the entertainment industry against each other and ultimately only one stands victorious.

Created by Corden, executive producer Ben Winston, Jensen Karp or “Hot Karl” (who wrote Kanye Owes Me $300 and writes many battle raps for The Late Late Show segment) and Ed Thomas, the show officially airs May 2.

“’Drop the Mic’ is a funny, authentic, high-energy series that brings together Hip Hop, comedy and pop culture in a way we’ve never seen before,” he said. “Method, Hailey, James, Ben and their team will make sure our celebrity competitors bring their ‘A’ game to the stage.”

Method Man, of course, is no stranger to being in front of the camera. In addition to his countless music videos with Wu-Tang, Redman and a plethora of others, he’s also appeared on the big screen in movies like How High, Soul Plane, Garden State, Trainwreck with Amy Schumer and Key & Peele’s Keanu.