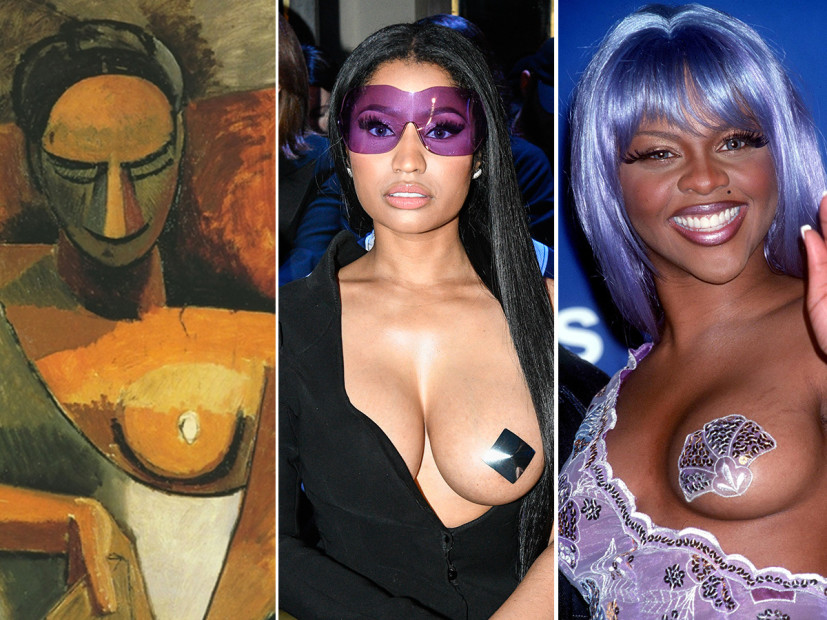 Paris, France – The bold, bare-breasted outfit Nicki Minaj wore to Paris Fashion Week over the weekend drew immediate comparisons to Lil Kim‘s similar bold, bare-breasted 1999 MTV Video Music Awards ensemble, and to a lesser extent, Janet Jackson’s infamous wardrobe malfunction at Super Bowl 38 in 2004. But the Queens star took to Instagram on Sunday and hinted that the inspiration for the outfit was only famed artist Pablo Picasso.

The “SHETHER” target was front row at Haider Ackermann’s AW18 show on Saturday with a black jacket showcasing her exposed left breast, with the nipple covered by a pasty. Once the outfit started drawing attention (and comparisons to her Brooklyn rival), Minaj posted an image of Picasso’s La Femme à l’Éventail painting to IG, which features a female subject with her left breast exposed.

The reaction on social media was swift with many showing side-by-side comparison photos of the outfits showing the similarities. While Kim’s outfit was an actual dress and brighter in appearance with glitter, Minaj’s look was starker and paired with leather shorts.

Even with Minaj noting the inspiration behind the fashion choice, there were still some skeptics (largely among Lil Kim fans).

@NICKIMINAJ didn't expect the media was going to clock her for copying Lil Kim's pastie look, so now she claiming Picasso inspired the look! pic.twitter.com/VDs1YgiOHA

Nicki Minaj saying her outfit was Picasso inspired is her way of distracting you from the fact it's been a week with no response to #SheTher pic.twitter.com/urEcCWKPCh