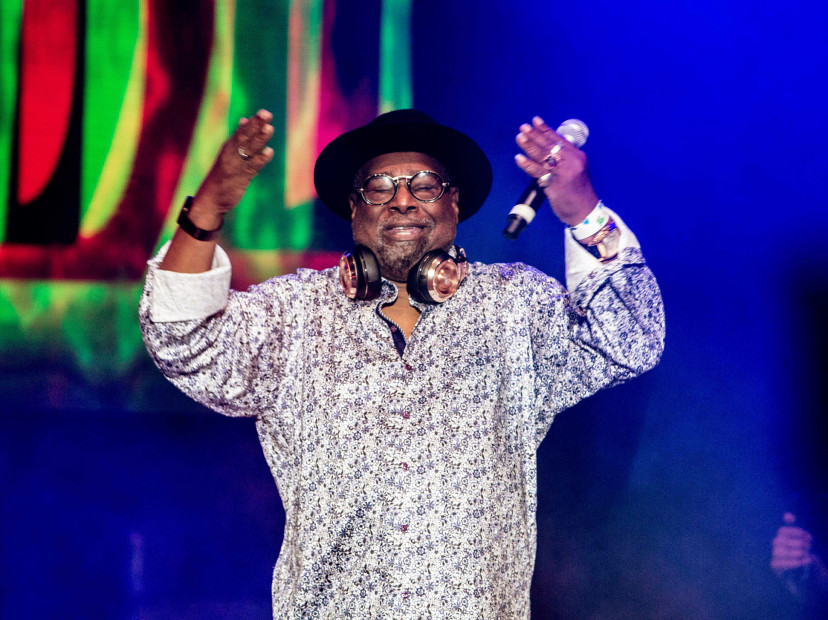 Many fans and music critics were already comparing Childish Gambino’s new sound to some of the earlier works of Funkadelic when he premiered it at The Pharos Experience over Labor Day weekend in Joshua Tree. By the time singles “Me and Your Mama” and “Redbone” hit the web and Awaken, My Love was fully released, those comparisons were more than confirmed.

Speaking over the phone with DX briefly, George Clinton explained his appreciation of Gambino paying homage.

“I just heard it [Awaken, My Love] one time and I like the songs,” said the music legend. “I’m aware of his music and know he’s into P-Funk so I know it’s going to be some good music. I haven’t had a chance to get all the way into it. When I did hear it, it sounded like a cross between P-Funk and Prince influence. I’m proud that he’s into the funk and glad him and others are bringing some new funk back.”

Hip Hop has a long history of sampling Parliament/Funkadelic and many artists have collaborated with the collective’s leader in person. Last year, Clinton was featured on Kendrick Lamar’s Grammy-winning To Pimp A Butterfly project on album opener “Wesley’s Theory.” According to Clinton, it further proves that P-Funk isn’t going anywhere.

Currently, the P-Funk master is contributing to Flying Lotus’ next project and movie alongside pushing forward his upcoming Parliament album Medicaid Fraud Dog. Over halfway done and set to feature guest appearances from Bilal, Thundercat and frequent collaborator Junie Morrison, the project will be the first since 2014’s First Ya Gotta Shake the Gate.

“It’s about all of the insurance get-over in the medicine field,” said Clinton. “The bullshit medicine, drugs and legal in some state drugs. The whole medical/pharmaceutical situation and the way people react to it.”

In the meantime, check out the tour dates below for his upcoming Mardi Gras Madness Tour kicking off February in Pittsburgh.