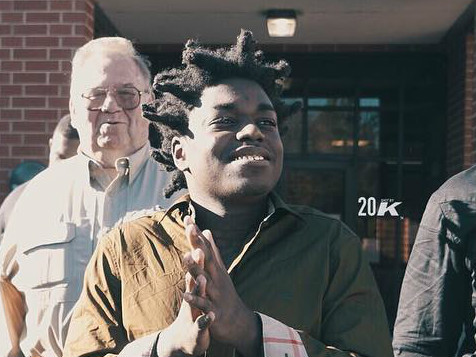 Florence, SC – Kodak Black is a free man after being released from jail in Florence, South Carolina today (December 1). He is accused of sexually assaulting a woman after performing a show in the town.

The 19-year-old rapper shared the news on his Instagram account, thanking his family, team and Atlantic Records. He adds he looks “forward to clearing [his] name in the very near future.”

I'm happy to finally be going home to my family and friends. I look forward to clearing my name in the very near future. I want to thank God, my family, my team (Vanessa, Phatboy and James McMillan), Atlantic Records, my lawyers and all of my fans for your continuous love and support. I can't wait to get back to doing what I love most – working at being the illest rapper alive.

South Florida’s Sun-Sentinel reports that Black posted bond of $100,000 and that he will stay at an undisclosed location near his home in Pompano Beach, Florida, according to the terms of an unrelated sentence for misdemeanor drug charges.

Project Baby was transferred to South Carolina after completing the jail time required by the sentence. He has been in police custody since May when he was arrested on various warrants a month after he was arrested for leading police on a car chase after authorities witnessed him purchasing marijuana.

When he was undergoing the process to be released from the second arrest, two more warrants were found: the drug case and the sexual assault case.

The warrant and police report for the alleged sexual assault have been released and reveal allegations that Kodak assaulted a female fan, including licking her, biting her and forcing her into sex. The report adds that the alleged victim reported the incident to a school nurse.