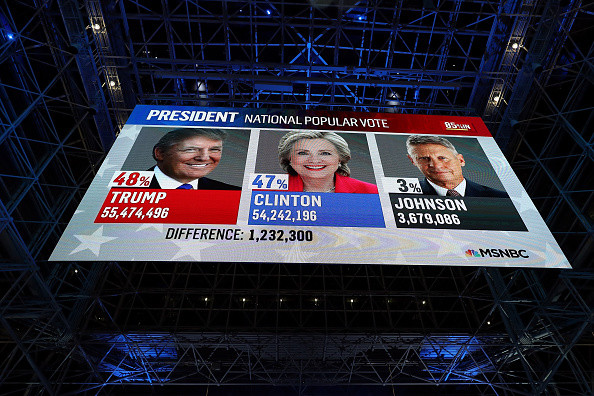 It goes without saying that countless political pundits, journalists and publications didn’t see the reality in a Donald Trump presidency but here American stands with said reality.

It was an election that faced several controversies but still attracted those magical 270 Electoral College votes to ensure a Republican victory. Yet and still, several Hip Hop superstars couldn’t contain their astonishment as the numbers rolled in.

Diddy, foreseeing what was to come, posted a meme on his Instagram that read “Keep Calm: No matter who is president, Jesus is king.” David Banner undertook a similar sentiment, telling his Twitter followers not to “freak out” all the same.

Naturally, there was also defiance across the board. YG, who has been campaigning all year with his single “FDT (Fuck Donald Trump),” promised to keep the middle fingers high and Public Enemy’s Chuck D fired up his social media with his traditional fevered persona.

Check out the numerous reactions down below from numerous people you definitely heard of. And nope, they’re not pretty

This shows you the world is at a trifling place! And it also shows you that entertainment can make sucka a seem superior!

I am disappointed, shocked and shaken at my core by what has transpired tonight. I gathered around the TV with my family and loved ones, ready to celebrate history being made. My daughter had this little blue dress on. I was ready to pop the Martinelli's and hold her, watching Hilary Clinton become the first female president of the United States of America. But…It didn't happen. I had a sick feeling in my gut, riddled with anxiety as the polls started coming in. After hours of a growing pit in my stomach, it was over. I left the TV, grabbed my daughter and took her to bed. But now, as I'm laying next to my her as she sleeps, I remember. Remember what I have control over and what I don't. I don't have control over Donald Trump becoming president. That has been decided. But what I do have control over is where I go from here. I will teach my daughter to love. All people, regardless of the color of their skin, gender, religious beliefs, sexual orientation or where their birth certificate says they're from. I will teach her how important it is to be an advocate for humanity. Not just the portion of humanity that benefits her. I will teach her non violent communication. That in the face of hatred we must love each other even harder. Not give in. Not get discouraged or feel like our progress in the past is void. Keeping fighting for all of us, with an emphasis on those that and have been the most affected by systemic oppression. I will teach her that when she is silent during moments of injustice, she is siding with the oppressor. I will teach her that walls divide people, and by their nature cannot bring us closer. And that just because someone holds the most powerful position in the world, does not make that person right, just or fair. Donald Trump is not raising my daughter. I am. I get to encourage and nurture her to be who she wants to be. Teach her that her voice and actions can change the world. Teach her that she can do anything that a man can do. And one day, even become president of the United States of America. I have work to do. It starts now. And that work is the only thing bringing me peace at the moment

Aye, what y'all wearing to the slave auction tomorrow ??

Now you done fucked up

One last time.. My president is Black.

I feel like America just sent in our tuition check for Trump University.

I was wrong. I thought America couldn't possibly disappoint me more than it already had. But, I was wrong. RIP America.

I survived The Reagan Era. The 80s & raise no Punks https://t.co/eUmKqo48QD

Buckle Up Kiddo's. Gonna be a rough one https://t.co/H9uo2h5XfO

remember, you get what you ask for, America. I will wake up tomorrow as a black man feeling the same way I felt when I woke yesterday.

Im terrified for the future.

Sending my love to the people of the United States right now, this is the tone of the people right now – Lil B

This sht traces back to the damn OJSimpson verdict.A long trail of Black smiles that the USA got tired of seeing. Its 1877 regurgitated…

pence is the devil

If Trump wins just know we gotta go that much harder!!! #EatwhatyouKill

*looks up flights to Canada*

but fr, don't be scared. don't go nowhere. the beast just took its mask off… Its time to face it America

No jokes tonight. Do not laugh and look away. Watch this, stay here. Burn this into memory. Wake up tomorrow: the fight will await you.

Don't freak out. Go to sleep, wake up and continue to be Black in America.

This is the opposite of lit.

Maybe the hackers hacked the polls.

their signs say 'the silent majority stands with trump'. printed official signs. they worked the pollsters. they worked all of us.

Once again America has continued to FAIL WOMEN, MINORITIES, MUSLIMS, & IMMIGRANTS, LGBTQ, this is so disgusting.

I. Cant. Breathe. Sitting up at 2:48 am trying to decide what to say to my daughter in the morning. This country, society is doomed.

I'm embarrassed for this country … he's not my president #DividedStatesofAmerica

Yo @Jeezy Have that "my president is wack" remix on deck.

Anyone else as stressed about this election as I am right now?!

We let a realty tv star become the president of America.

We have to be brave! And this adversity can bring greater strength as we reorganize to fight for what is right!

Niggas act like if Trump won, slavery would come back! Well get your cotton-picking fingers ready! ?????

Sad day to be American

Well White America, I hope your happy… let's see how this pans out for you lol. #West2020

When The Civil War popping off?

But alas, there was one rapper/producer who was down with DJT: Polow Da Don.