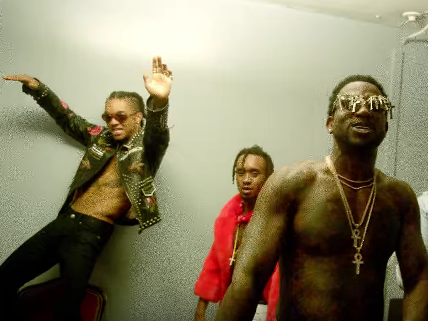 Rae Sremmurd’s “Black Beatles” lands inside the coveted Top 10 of the Billboard Hot 100 this week, a landmark for both the Mississippi duo and the song’s featured artist, Gucci Mane.

The track, which jumps from #16 to #9 this week, serves as the highest-charting song that Gucci Mane has ever appeared on. Lil Wayne’s “Steady Mobbin,’” another of Gucci’s high-profile features, peaked at #48 following its release in 2009. Guwop’s own highest-charting single is “Wasted” featuring Plies, which reached the #36 position, also in 2009.

“Black Beatles” is the third single off Rae Sremmurd’s sophomore studio album, SremmLife 2. The project, which was released in August, received a 3.9 out of 5 rating by HipHopDX, with writer Narsimha Chintaluri calling the effort a “worthwhile (and much needed) bid for album of the summer.”