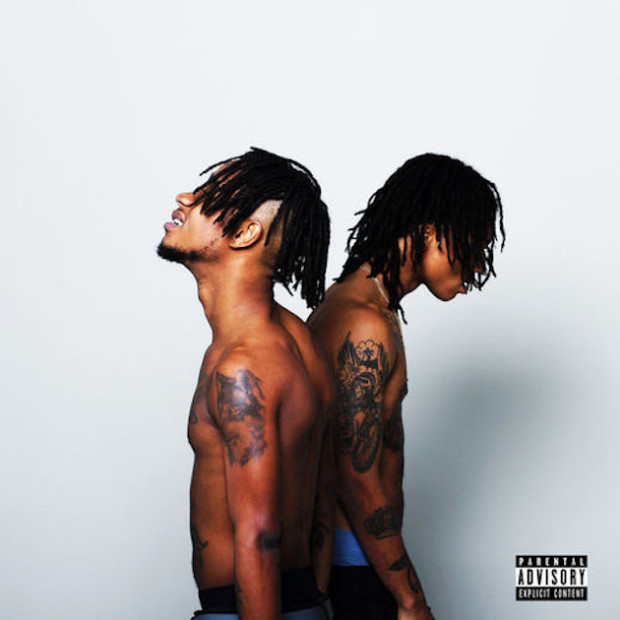 Listen to the original Sremmlife again, it’s better than you think it is: those synths on the intro are crazy; “Up Like Trump?” is intoxicating; even “No Flex Zone” has aged well despite the overexposure. Hailing from Tupelo, Mississippi, the rap duo Rae Sremmurd, brothers Slim Jxmmi and Swae Lee (aged 21 and 22, respectively), took the radio by force in 2014 with deafening back to back hits – it was a genuine rags-to-riches tale penned by prolific Atlanta producer, Mike WiLL Made-It. In a year anchored by Kendrick Lamar’s introspective and politically charged turn on To Pimp a Butterfly, the brothers delivered a defiantly celebratory album packed with anthems. It was enough to place them at #3 on Complex’s “Best Albums of 2015” – a decision that sparked Ebro of Hot 97 to basically accuse the men of being frauds and not writing their own hits. A common string in the reception of their sophomore effort, Sremmlife 2, will understandably use this narrative to explain why Swae and Jxmmi have come back so much sharper this time around. But that’s misleading – they’ve always had the foundation for this growth.

Where the debut shouted it’s appeal in your face, the sequel presents a more restrained approach. The intro, “Start a Party,” for example, boasts a backdrop loud and busy enough to be a worthy opener for their forthcoming tour, but the verses are tightly-wound exercises in double time. Their previous futuristic takes on the standard strip club banger, à la “Throw Sum Mo,” have been upgraded to the one-two punch of the dizzying Juicy J-assisted “Shake it Fast” (boasting a verse from the trippy OG that manages to sneak in a line about a black card that would make Nelly proud) and the Lil Jon-featured “Set the Roof” (co-produced by DJ Mustard and Mike Will) — the latter somehow melding multiple regional influences together, playing like it’s the soundtrack to a house party thrown in Brooklyn by a Compton native — who grew up on Atlanta crunk. It’s still bold and hectic at all the right times, but there’s a lot more at play here.

The group’s often frat boy-ish writing is still present to some extent, but it’s been refined. Jxmmi can be argued to be bar-for-bar the better rapper, but Swae is a master at finessing empty platitudes. The older brother is no less crass, but his menace is more upfront and less coying, stealing the show with his bravado on “Real Chill” (featuring the currently incarcerated Kodak Black), and with his insecurity-riddled love letter on “Now That I Know.” Swae has his fair share of standouts as well: he surgically cuts through the frantic intro and equally energetic “Shake it Fast,” plays with the bonus cut “Swang” like it’s puddy in his hands, and even gets introspective on “Came a Long Way” (“what a journey, all that broke shit don’t concern me”).

Swae Lee’s ear for familiar yet slightly exotic melodies is usually what has him in the driver’s seat, despite his sometimes flat singing (“Now That I Know”). He knows when to play with his cadence (“Real Chill,” “Look Alive”) and his tone (“By Chance,” “Do Yoga”), and his approach has become more measured, as heard on the hook of the transcendent dance number “Black Beatles.” Another DJ Mustard and Mike Will collab, this highlight has an ethereal aura that sounds seductively welcoming. Effervescent ad libs chime in as Swae mimes a perfect Gucci flow before diving into a muted falsetto, making way for ATL legend himself to euro steps past a hater like Rondo. Jxmmi rounds off the last verse with an impassioned speech, boasting “15 hundred on my feet, I’m tryna kill these haters.” “Look Alive,” one of the singles, and “Take It or Leave It,” also comfortably fit in this newfound retro-pop atmosphere.

Sremmlife 2 is worthwhile (and much needed) bid for album of the summer. It’s top heavy, “By Chance,” “Look Alive,” and “Black Beatles” feeling a lot like one of the best three song stretches of the year, but Swae brings a promising sense of experimentation to the entire project (rightfully confident after his credits on Beyonce’s “Formation”). Jxmmi brings an air of assertiveness to the affair, usually playing expertly off his brother, occasionally taking the backseat when the younger rockstar decides to do something weird like “Just Like Us” (imagine the already saccharine overtones of “This Could Be Us” pushed to a Lil Yachty level of intolerable). These two, along with Mike WiLL, take a proven formula no one would’ve minded experiencing again and push it into unexplored territory, all on their own accord. And that’s worth celebrating.