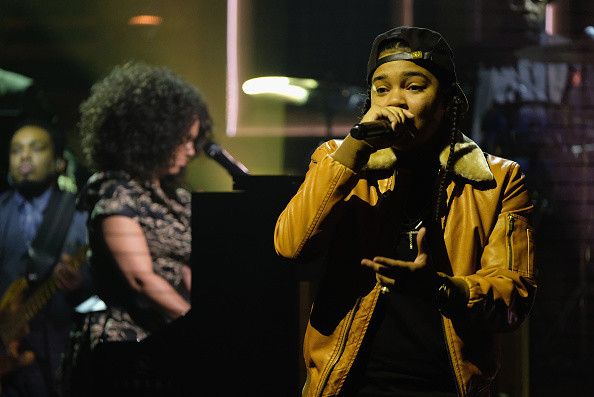 One of the men who accused Afrika Bambaataa of sexually abusing him has launched a scathing attack on Hip Hop for “promoting homosexuality with an iron fist.”

Hassan Campbell (also known as Poppy) also claimed that there is a correlation between homosexuality and pedophilia when interviewed on the Murder Master Music Show hosted by Prez and Mac Jay.

“When you are watching these TV shows now, they are promoting homosexuality with an iron first. Like the show Empire and now out of the blue, they decide they wanna take Young MA, the girl from Brooklyn, and they want to put her on the front lines of Hip Hop.”

“She’s damn near just as big as Nicki Minaj now. And her music is basically based on beating women up and killing dudes,” he claimed.

For the record, Nicki Minaj has 20.7 million Twitter followers compared to Young M.A’s 73.1 … thousand. Don’t worry, there’s no unhealthy competition between them, though.

He continued, “Now I can’t make a song about whoopin’ a female ass or saying certain things, but it’s OK for her to do it? This chick, this young girl, has been out for quite some time now but now the mainstream decides to throw her on the front lines and this is what they are pushing.”

Poppy capped off the rant by adding “Homosexuality and pedophilia run hand in hand. Most people that are gay will tell you that they were molested,” something which has been repeatedly refuted by many studies.

There was also a blurb about the way Zulu Nation responded to the allegations of sexual abuse, explaining that the “Planet Rock” creator was only believed because of his reputation in New York City.

“Bam is paranoid! Years ago Bam would put something to cover the cable box because he believed that the cable box could see inside your house, and this was before technology so if he was paranoid like that back then do you think he gonna hold onto those books? Hell no!

“Bam is very paranoid when it comes to government, as far as you catching him with that book, that’s not gonna happen. I’m pretty sure he got rid of it or buried it somewhere where you have to really, really look for it. He’s smart, or nine times out of ten, I’m gonna act like he is smart. The reality of it is that anybody who looks at the situation with Bam, and you analyze it, you could see clear as day with all the evidence out there that he is guilty. You can see how he handled it that he is guilty. And anybody that knows the Zulu Nation knows that if I wasn’t who I was you would have the whole Zulu Nation coming together saying that man is a liar.”

Listen to other portion of the interview where Campbell thanks Beyonce for allegedly kicking Bambaataa off her tour once the accusations came to light. He also maintains “Bam won’t stop touching kids” because he’s “obsessed with kids.”