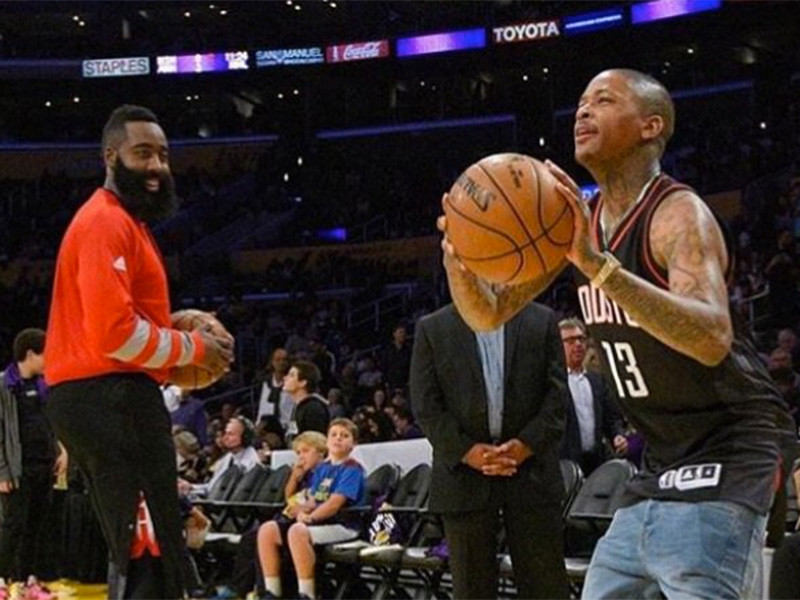 YG sat courtside at the Lakers’ season opener against the Houston Rockets Wednesday night (October 26) and was heckled by some fans who weren’t too pleased with the Still Brazy rapper rocking a James Harden jersey.

One reporter took notice and tweeted about what he witnessed, admitting he had no idea who YG was without an “exhaustive Google search.”

“YG is sitting courtside in a Harden jersey and taunting some Lakers fans,” Bill Oram of the Orange County Register cracked.

Although Harden plays for the Rockets, he’s a Los Angeles native and YG was only showing support for the hometown hero.

James Harden is from LA pussy RT @billoram: YG is sitting courtside in a Harden jersey and taunting some … https://t.co/mol6N8dcuW

YG didn’t seem too bothered by Oram’s jab and continued to enjoy the game alongside Nipsey Hussle and Karen Civil, even shooting a few baskets with Harden during halftime.

Oram, however, was excited YG acknowledged him and he and his reporter friends continued to joke about the incident throughout the night, tweeting that he was happy to have survived the encounter.

Well, my night is made. https://t.co/wPtvpyyNYR

@calvinwatkins I don’t ask for much. Just not to die in a rap battle before I turn 30