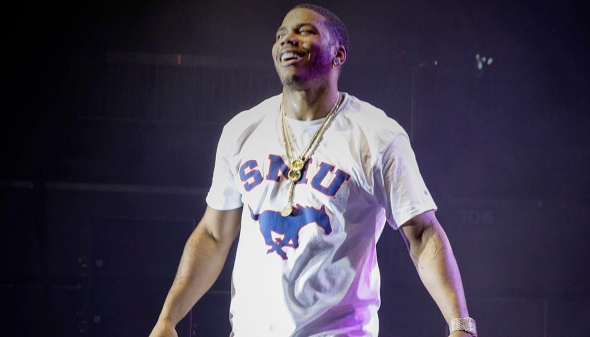 Los Angeles, CA – Back in July of this year, Nelly reached a milestone that has gone nearly extinct in music when his debut album Country Grammar went diamond (a.k.a. RIAA certified sales of 10 million albums) and now the St. Louis-bred rapper is adding another shot of pimp juice to his chalice after signing on to join Joy Taylor, Skip Bayless and Shannon Sharpe as a sports analyst on their sports debate show, Skip and Shannon: Undisputed.

Nelly, who recently told HipHopDX that he plans on dropping a collaborative mixtape with Florida Georgia Line, was the first rapper to join Skip on his previous show First Take which he co-hosted with Stephen A. Smith, and according to the outspoken sportswriter, has proven his expertise in the world of sports.

“I can’t wait to reunite with my man Nelly,” says Bayless in a press release. “Seven years ago he was the first rapper we ever had on my former debate show, and he was a revelation. He can debate sports with the same passion, guts and clever creativity that he writes and performs his classic music. He and I share this: we think we’ve never lost a debate. Nelly was made for Undisputed.

“Over & Over”: Nelly is joining forces with FGL for some bro-country Hip Hop very soon.

This new role marks Nelly’s third show with Nellyville and Real Husbands of Hollywood both airing on BET. With all three shows running concurrently the multitalented rhymer is now one of less than a handful of African-American actors to boast such an honor.

“With new music out, touring, Real Husbands of Hollywood out October 11th and Nellyville season two, Country Grammar going diamond and now getting to work with Fox Sports, this is a great year, and I’m excited to be presented with continuous new opportunities”, the soon-to-be 42-year-old star exclaimed. “I usually just comment on sports from my couch, I’m very passionate about sports, so this is something I’ve always wanted to do and I’m looking forward to working with Fox, Skip and the team.”

Skip and Shannon: Undisputed airs weekdays at 9:30am EST on FS1.