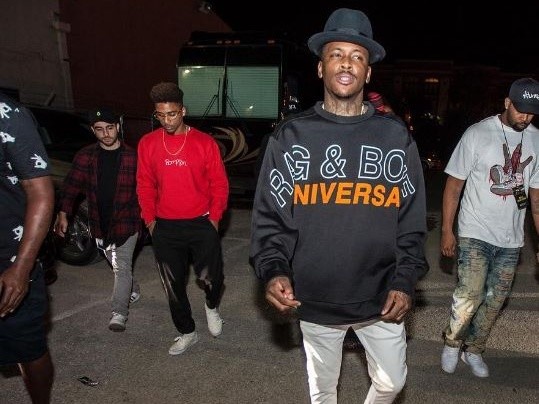 A petition to have YG’s “Meet The Flockers” banned has reached its goal of 100,000 supporters and has therefore warranted a response from the White House.

According to Atlanta Black Star, given that the petition reached the necessary amount of support, government officials must respond within 60 days.

The creator of the petition, listed as Y.C. says, “The song ‘Meet the Flockers’ by YG encourages violence and crimes to a specific ethnic group.”

Before demanding that the My Krazy Life record be banned and the rapper be investigated, the petition creator stated that the Chinese community was offended and threatened by “Meet The Flockers.”

“As one of this group in North America, I feel seriously offended and threatened. Please ban the song from public media and investigate legal responsibilities of the writer,” the petition said.

On “Meet The Flockers,” YG kicks off the DJ Mustard-produced record by describing a burglary and rapping: “First, you find a house and scope it out / Find a Chinese neighborhood, cause they don’t believe in bank accounts.”

In an interview with The Urban Daily several years ago, YG said much of My Krazy Life, including the controversial song, was based on his own experiences.

“Where I’m from that’s what the teenagers up to the mid twenties is doin out there…they flockin,” he said. “That’s big in the culture. They burglarizing houses.”

He faced a two-year prison sentence when he got caught breaking into a home, but served only three months behind bars because of intervention from a high school friend’s mother who worked in the justice system, before signing to Def Jam in 2009.

“I went to jail for residential burglary and when I got out three months later I got signed,” he continued. “[But] I was supposed to get two years in the pen. If I had gotten the two years I wouldn’t have got signed to Def Jam. What I had in the streets would have died down probably.”

Since the petition has surfaced, YG has remained relatively silent on the matter, offering no response on social media.