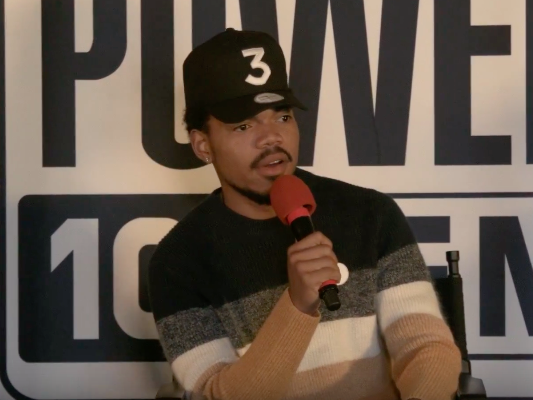 Los Angeles, CA – As a longtime Kanye West fan, Chance the Rapper explains why working on Good Ass Job with his Chicago idol is a dream come true for him even with his appearance on West’s The Life of Pablo song “Ultralight Beam.”

The 23-year-old rapper teased the project with him and Yeezy back in May during an interview with Zane Lowe on Beats1 radio and elaborates now that “it’s definitely far from done.”

“The Good Ass Job, that’s something that’s just been a dream for me,” Chano tells “The Cruz Show” on Power 106. “I’m a Chicago kid, so I’m a super ‘Ye fan, and I used to watch all the, you know, YouTube videos and, like, him speaking. And I remember just watching a video a long time ago where he would go on, he was explaining, you know, how you have your College Dropout, and then you go back you have your Late Registration, and then you finally get your Graduation. And after you graduate, you gotta go get a Good Ass Job, so that was a thing in my head forever, and, you know, if you’re a ‘Ye fan, you know, then he went on 808s & Heartbreak, and then you’re like, ‘OK, Good Ass Job will be next,’ and then he does Dark Twisted Fantasy and Watch the Throne.”

Chance says that he and Yeezy probably have about two songs recorded already that are slated to be part of their Good Ass Job project and makes mention of the collaborative album Drake and Kanye are rumored to be working on.

“I know ‘Ye’s working on something with Drake, which I haven’t heard any of the songs from yet, but I’m sure it’s all I’m gonna be listening to,” he says.

Check out Chance the Rapper’s interview with Power 106 below.