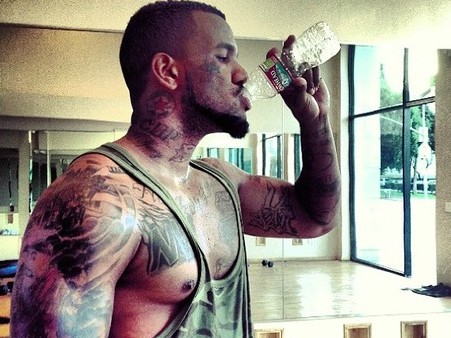 Out of the blue Thursday night (September 15), The Game dissed Meek Mill in front of a live audience and gave The Breakfast Club the premiere to a new track called “92 Bars” from his upcoming 1992 album. In the diss, Sir Jayceon mentions running up on Meek and mentions giving his girlfriend Nicki Minaj the “pool stick.” The assault even moved over to Instagram where the two took serious shots at each other.

Game also unveiled the official cover art to “92 Bars” with the title using The Philidelphia 76ers logo along with an air filled giant rodent with the words “Shame On Meek Mill The Philly Rat” on the bottom left. There was also a screenshot of Meek and his boys riding their bikes during the last Maybach Music Weekend.

He also posted this since-deleted image of a photoshopped Meek clinging to EJ Johnson, a.k.a. Magic Johnson’s son, who is openly gay.

Not to be outdone, Meek fired back with the infamous video of  Game crying in reaction to The Sean Bell shooting when he said “I don’t want to be a part of Hip Hop no more.” And yes, he also bets a million that 1992 won’t sell past 15K in its first week. Meek even calls Game a hypocrite for his efforts to unite black men in regards to ongoing police brutality while starting beef.