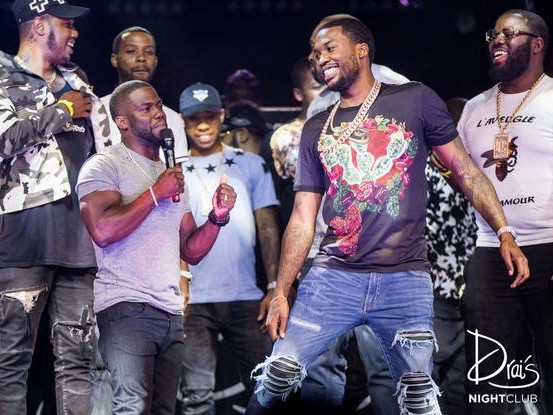 The two Philly natives went bar-for-bar onstage, with Meek Mill opening up the bout with: “Poppin’ up on my stage I’m like, ‘What is the odds?’ / He must be on molly or somethin’, look at his eyes.”

Droppa hit back with a few punchlines of his own: “I looked at my nigga jeans I said, ‘We been done with that’ / Stop fuckin’ wearin’ pants that show your shape ain’t shit / I look at you, I look at Nicki I say, ‘Girl you too legit to quit.”

This isn’t the first time Meek Mill and Kevin Hart have battled against each other. Back in 2012, the pair went back-and-forth backstage during Meek’s Dreams & Nightmares Tour spot at the House of Blues in Los Angeles.

While he’s best known for being a comedian and movie star, Kevin Hart has been making notable inroads into the music industry over the past few months. Back in August, Hart’s rapping alter ego Chocolate Droppa apparently inked a deal with Motown Records. At the time, Droppa announced that his debut album is set to arrive sometime this fall.