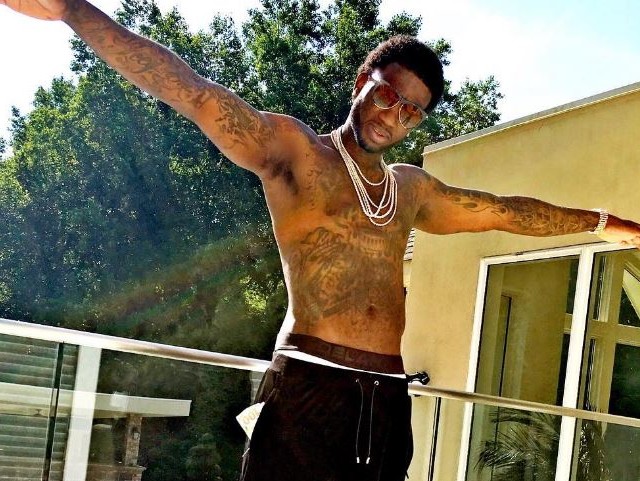 Gucci Mane says he could not wait to release his Woptober album on October 17 to commemorate 1017, so he dropped it today (October 14) for free for his fans.

The 13-track project is Guwop’s second LP after his release from prison in May. Woptober boasts more Zaytoven production and features from Rick Ross and Young Dolph. The Travis Scott-assisted “Last Time” did not make the final cut for the album.

This follows Everybody Looking, which dropped in July.

Stream Gucci Mane’s Woptober album below and keep scrolling for the icy cover art and tracklist.

The follow-up to Everybody Looking is now available for iTunes pre-order, which shows that Woptober is scheduled for an October 17 release date.

The cover art and tracklist were also revealed, showing Guwop carved as an ice sculpture on the front of the project. Burr!

Woptober is supposedly made up of 14 tracks and includes guest appearances from Rick Ross, Young Dolph and Travis Scott, who is featured on the project’s lead single “Last Time.”

(This article was first published September 3, 2016 and is as follows.)

This album follows up Everybody Looking, which debuted earlier this summer.

The first single from Guwop’s new output is “Last Time” with Travis Scott, which was released on Friday.

“My new single #LastTime ft Travis Scott from my upcoming album #Woptober is now on iTunes !!!!” Gucci Mane said on Twitter upon its release.

“I love when my bitch get drunk cause she talk greasy to me/Nigga with an attitude, this shit gettin’ easy to me,” Gucci Mane raps on the first track for Woptober. “The last time I drunk some lean I was out of my mind/ Trappin’ gave me 20 years and that’s a whole lotta time/ A married woman divorce her husband to spend the weekend with me/ He think it nasty when she squirt but that shit sexy to me/ The last time I took some molly, took a gram and a half/ Niggas think they know ’bout Gucci but they don’t know the half/ See I’m an ex-X popper and online shopper/ Niggas thought I was a clone, they heard me speak proper/ Convicted felon worth 10 million, I’m a well known robber/ Like Shawty Lo I got 10 children, yeah, Lo my partner/ Wop.”

Woptober does not have an official release date.