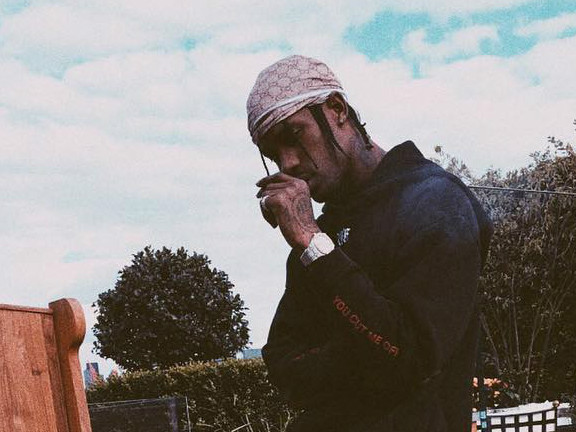 Travis Scott is to be the newest host of an Apple Music Beats 1 radio show, according to an announcement on Twitter. The show is called “.wav radio” pronounced “dot wave.” The Houston rapper spoke with Zane Lowe on Apple Music to share details on the show. Seth Rogan is slated to be the first guest on “.wav radio,” whose air date has not been revealed.

“I was performing Seth Meyers and he was a guest on the show and he was like, ‘Yo, man, I fuck with your music,'” Scott says. “I was like, ‘Yo man, you’re like one of the illest actors/writers/directors of all fucking time.’ I had a doll and I gave him a doll… my action figure from my first album, this is around when my album first came out. I gave him my action figure and the fucking lady from my label went and took it from him. I got so fucking pissed. He tweeted me, ‘Yo, they took my doll.’ So I ended up shipping him one. So he got it. So I was like, my first show, I gotta have this dude rocking with me.”

Scott explains that he is excited to take control of the flow of content on his show. He says he is inspired by Lowe, Funkmaster Flex and the legendary Larry King in how he will host his program.

“These motherfuckers just be having the illest motherfucking shows,” he says. “Y’all put together the illest shit. I feel like with this, it’s moreso I want people to like really understand who we are and anybody that we have come pull up on the show, I want to understand a different side to them.”

“.wav” shares the same name as a Los Angeles party Scott is to host Friday with more information about his forthcoming LP, Birds in the Trap Sing McKnight. It was previously reported that Friday will be the project’s release date, but Scott tells Lowe that more details on the album are coming.

“I’ve been working super hard on this album,” he says. “It’s like I feel like a very good body of work I’ve done. From one to however many tracks it is on the album. I feel like I attacked it a different way than I did Rodeo.”

Scott explains how the purpose of his first mixtapes and debut album was to establish his perspective and now that fans know who he is, he had a different focus for Birds in the Trap Sing McKnight.

“I’m really just going in on the song, all big joints,” he says. “I’m not trying to really have no sleepers, nothing. People, if you’re a diehard Travis fan, you’ll understand this. I just want them to understand from one to the end. I’ve worked with like so many people I’ve always wanted to work with on this album, too, so it’s amazing.”