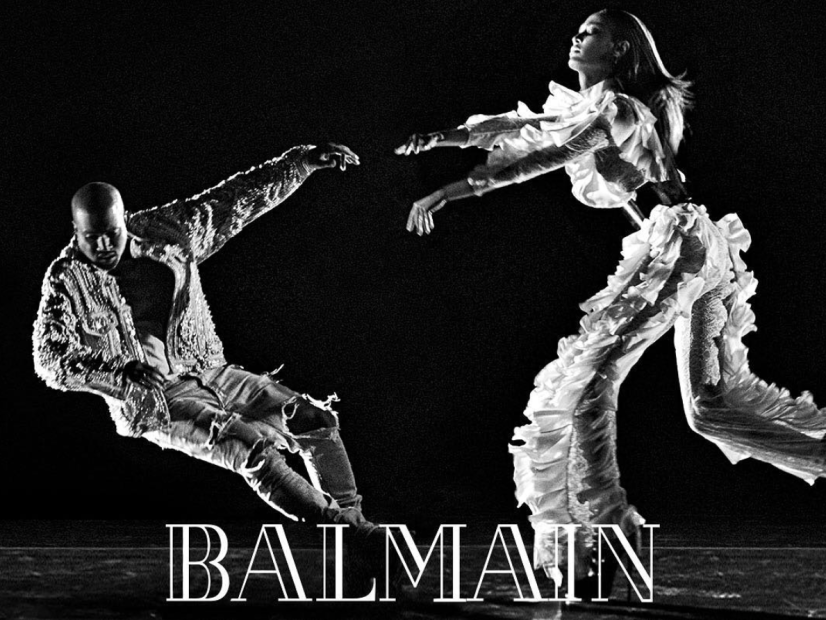 Kanye West and supermodel Joan Smalls have been selected as the stars of Balmain’s Fall 2016 campaign.

West is rocking the custom-beaded Balmain jacket he wore to this year’s Met Gala and a pair of distressed denim jeans in the advert, which was shot by the legendary fashion photographer Steven Klein. Ye is seemingly falling backwards as Smalls appears to be attempting to catch him (or maybe she pushed him?)

This is the “Famous” rapper’s second campaign with the French brand, this time sans his wife Kim Kardashian. The couple starred in Balmain’s sultry “Army of Lovers” Spring/Summer 2015 campaign.

Kanye and Kim are long-time friends of Olivier who often features the Kardashian clan in his advertisements. Kendall, Kylie and Kim have all had their turns being featured as part of the Balmain Army in the brand’s campaigns. He also dressed the whole family for West’s Yeezy Season 3 Fashion Show at Madison Square Garden in New York.

The French fashion designer considers Kanye West to be a “fucking God,” so it should come as no surprise of their continued work relationship and friendship.

“If I think about someone who I love and respect for their vision and brand, I’d have to say Kanye West,” Rousteing says in a recent Hypbeast interview. “I love Yeezy. I wear Yeezy. You know what I love about him? It’s that he can create so much tension and power at the same time. It’s insane!”

Check out clips and photos shot for Balmain’s Fall 2016 campaign as shot by Steven Klein below.