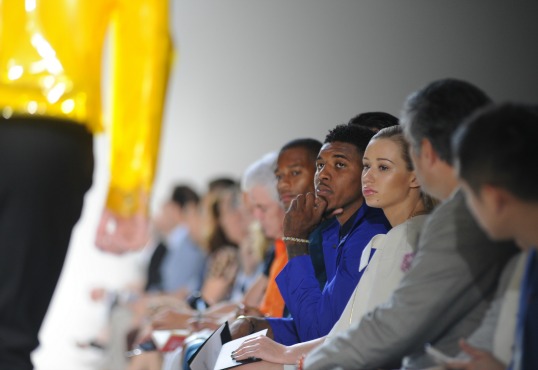 Los Angeles, CA – As it turns out, the reports of Nick Young dropping a Usher “Confessions” bomb on Iggy Azalea were widely exaggerated but that doesn’t mean there wasn’t cheating involved.

Azalea took to her Twitter to reveal she was learning about the whole pregnancy-baby-mama thing at the same time as the rest of the world but she did admit she caught her NBA beau red-handed — in all his grainy, surveillance camera galore.

“I have never even been told by nick that his baby mother is pregnant so if this is true I’m finding out via E news,” she wrote on Twitter, which was an indirect reference to the suspect story that was broke on Life & Style Weekly.

“I broke up with Nick because I found out he had brought other women into our home while I was away and caught them on the security footage. This is just like a second shot to the chest. And I feel like I don’t even know who the hell it is I’ve been loving all this time.

“People in this world really are fucked up,” she concluded.

Swaggy P has yet to respond publicly to any of the recent news but he was last spotted in Paris on Instagram so there’s that.

The details regarding Iggy Azalea’s exit stage left in her relationship with Los Angeles Lakers guard Nick Young keep finding themselves open for public consumption — and they’re still not pretty.

While the Australian rap star cited trust issues for her split, which involved a broken marriage engagement and dissolution of a mortgage, Life & Style Weekly is claiming that the infidelity goes deeper than just a wild romp he shared with his teammate, D’Angelo Russell.

Swaggy P is reportedly expecting another baby with Keonna Green, the mother of his four-year-old son, Nick Jr.

“Nick waited until Keonna was four months pregnant to tell Iggy the news,” LSW’s “insider” writes, while adding that he told his former “Fancy” fiancée “he was drunk and had a lapse in judgment” at the time of fertilization.

Green is said to be four months pregnant and Life & Style managed to get her to slip up on June 21 with a “yes” when they asked if the pregnancy was indeed an accident, before she remembered her media training and hit them with a “no comment.”

They say “when it rains, it pours” and Iggy has definitely been getting wet in 2016. She recently got the trolling of a lifetime in a viral Snapchat video when an undercover hater got her to smile before he told her “she ruined Hip Hop” and her sophomore studio album, Digital Distortion, is completely devoid of a release date.

Adversity can do one of two things for an artist: make them crumble altogether or propel them to create the album of the career.

The stage is set for Iggy to massively succeed in either scenarios.