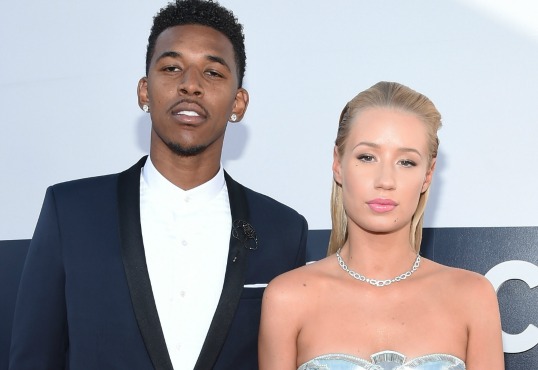 Iggy Azalea Did Not Dump Nick Young's Things In Her Driveway

Los Angeles, CA – Iggy Azalea took to social media again to clear up the situation between her and now ex-boyfriend Nick Young.

The media captured pictures of Swaggy P’s car apparently being towed from the couple’s home. There was also an image of items such as a couch strewn across the driveway.

The “Fancy” rapper made clear on Twitter that she is in fact the one that’s leaving and did not kick the Los Angeles Laker player out.

So there ya have it.

In case you thought Instagram wasn’t serious enough, Iggy Azalea shows she is officially done with Nick Young by putting his things out on her driveway. This comes just a day after Azalea posted a note on the Gram to say that she broke up with Swaggy P over trust issues.

According to New York Daily News, the “Fancy” rapper had the Los Angeles Lakers player’s blue 1962 Chevy Impala towed away. She bought the car for her lover as a Christmas gift in 2014.

The couple became engaged last year after dating since 2013. Rumors circulated earlier this year that Young cheated on Azalea after his teammate D’Angelo Russell filmed him talking about endeavors with other women.

One year after they announced their engagement all over social media, Iggy Azalea has flipped the script and announced via Instagram that her relationship with her Los Angeles Lakers beau, Nick Young is a done deal.

“Unfortunately, although I love Nick and I have tried and tried to rebuild my trust in him—It’s become apparent in the last few weeks I am unable to,” she posted in a statement on an iPhone note. “I genuinely wish Nick the best.”

She continued, “It’s never easy to part ways with the person you planned you’re entire future with, but futures can be rewritten and as of today mine is a blank page.”

Anyone who has been casually keeping tabs on the B-list couple can’t totally call chalk this up as a total surprise. In March of this year, a video surfaced that showed Swaggy P bragging about several of his sexual conquests — not named Iggy Azalea — to his teammate, D’Angelo Russell.

Unsurprisingly, the 2015 No. 2 draft pick’s name is currently dominating the trade rumor conversations.

Young didn’t go into much detail on his social media but he did echo Iggy’s sentiment, simply tweeting out “single.”

Proof of the social media split is posted below.

And then there was this.

Somebody’s mentions must be in shambles.