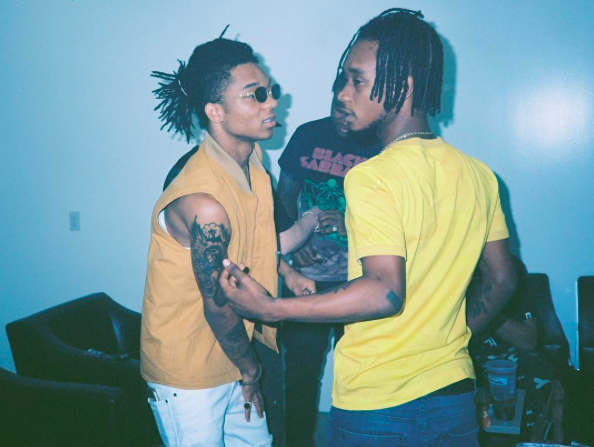 In an interview with 106 KMEL’s Shay Diddy after their Summer Jam performance, the SremmLife 2 duo described the night’s adventures beginning with the spotting of a fan who was flashing them in the audience. However, there was one “ugly” girl in the group who was among a bunch of “fine” women.

While Swae zeroed in on one particular girl, Slim Jxmmi had other plans that didn’t quite work out.

“When we was leaving the show I said, I bet that girl will suck us up in the Uber on the way back, but then it didn’t work that way because she started talking,” Slim Jxmmi recalls. “So when we got back to the hotel, I just left her in the lobby because I went to my room and started playing PlayStation.”

That left Swae Lee with a bunch girls in his suite.

“He left all the girls in my room and I just wanted one girl and then I had all these third wheels in the room with me,” Swae says. “I dozed off and then she took the picture then, it’s cool though, I ain’t tripping. I’m a savage anyway, so you know.”

As Slim Jxmmi shakes his head, he advises his brother that the next time he decides to bring a group of unknown women to his hotel suite, he better take their phones and purses.

Swae and Jxmmi assert that they aren’t really bothered by anyone trying to discredit them when they’re enjoying the fruits of their labor like chilling on yachts or performing for a sold out crowd.

Swae says he has nothing but respect for Queen Bey and describes her as a goddess.

“It’s like unreal because I’m just thinking it’s just another song I did,” Swae says. “And then for like someone of that status to pick it up and want to record it, it’s just big man.”

Since Mike WiLL Made-It released “Nothing Is Promised” with Rihanna on the track, the duo hints that they too might possibly have a collab in the works with the Anti singer.

“Oh yeah, definitely trying to get in,” says Swae.