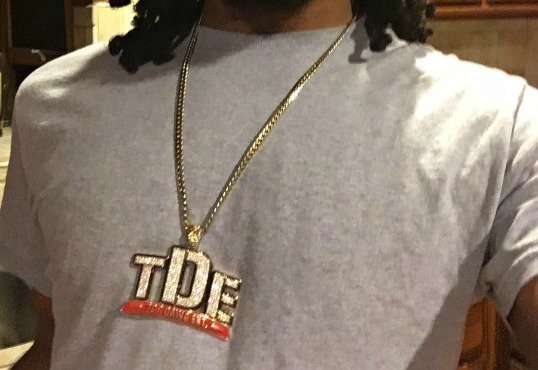 Los Angeles, CA – Chicago rapper Kembe X has plenty reason to be “feeling like the man” like his single that was released earlier in the year promoted.

While Twitter was arguing whether or not they should honor single mothers on Father’s Day, Kembe quietly alluded to the notion he was the latest artist to join the coveted Top Dawg Entertainment roster; home of the likes of Kendrick Lamar, ScHoolboy Q, Jay Rock and Ab-Soul. He uploaded a flick of himself not only rocking the label’s signature jewelry but also tweeted “TDE” to complete the cypher.

His alliance with the label follows the recent signing of fellow Chicagoan Lance Skiiiwalker, who boosted the roster back in May.

Although it’s not exactly clear what Kembe’s new association with the label is, there was no press release posted on the imprint’s official website and TDE CEO/Founder Anthony “Top Dawg” Tiffith made it clear he was just a surprised as the people about the announcement as were the people retweeting the Windy City native.

“Jus woke up n found out I signed Kembe X. [ScHoolboy Q] changed his album cover,” he said, referencing an uploaded photo of another Blank Face LP meme that erased Nicki Minaj’s likeness from her “Anaconda” cover art (but still kept the ass though!).

“Let’s keep it going I’m dropN my Ep 2day @ 12,” he said, playing along with the Internet rumors.

Kembe X may not have inked a contract but Top Dawg assured his followers he is indeed “a friend of the family” so apparently, there is no harm, no foul.

Peep the tweets below.

Let's see how many sites post that… When I signed something new I will let y'all know… Kembe X is a friend of the family..