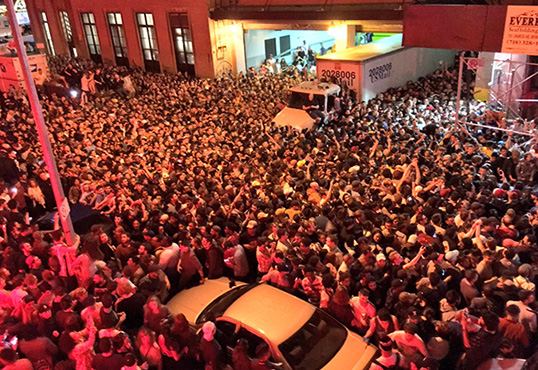 New York City, N.Y. – Kanye West didn’t let his canceled headline concert at the Governors Ball Music Festival slow him down Sunday (June 5), instead making a surprise appearance alongside some of the G.O.O.D. Music roster at Hot 97’s Summer Jam before causing chaos on the streets of New York with a secret pop-up show that never ended up happening.

Show at 2am SOLD OUT

The surprise show was first planned for Webster Hall, and thousands of fans crowded outside the downtown Manhattan venue hoping to get in. They chanted songs and slogans, climbed onto cars and scaffolding, and were eventually just told to go home.

One man was reportedly arrested, for disorderly conduct.

When you live across from Webster Hall and Kanye causes a riot ? pic.twitter.com/TIG1b7z2kC

Okay there are like weird stampede sprints and people climbing the scaffolding on 4th Ave and shit. Nooooope.

Kanye attempted to turn the show into an impromptu street party, to no avail.

SHUT DOWN THE BLOCK 4 STREETS AND PUT SCREENS SO THEY CAN HAVE A PARTY OUTSIDE. @kanyewest the ? pic.twitter.com/scOfRht9V6

Eventually the venue shut down the idea of the concert, citing safety issues.

There is no late show at Webster Hall tonight. Please get home safely.

Security guard at Webster Hall tells me Kanye was "really close" to performing before show was cancelled.

The owner of the banged up white car outside Webster Hall had nothing to say about the damage. pic.twitter.com/KNTMr01IZM

Kanye eventually made a quick appearance on the streets near the venue and was rushed by screaming fans.

when @kanyewest is getting mobbed by screaming fans right across your dorm ? pic.twitter.com/PMVJWD6MAw

.@kanyewest rides through the streets of New York #onlyonPIX11 pic.twitter.com/JKdGFYHcCl

Then rumors of another location popped up.

But didn’t pan out either.

Thanks to everyone. We tried pop up shows at 3 places. All shut down.

We made history tonight. Pablo mob.

Eventually Kanye’s wife Kim Kardashian gave a Snapchat update from bed, explaining that nothing was going down but that they’d tried.