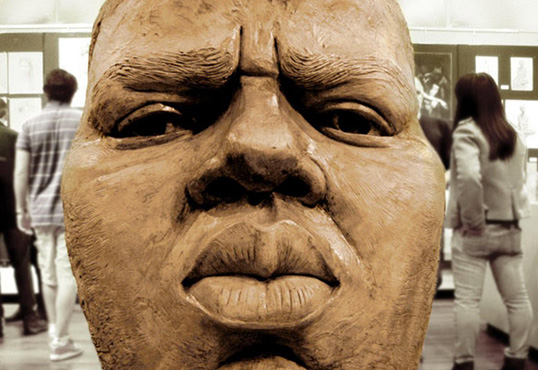 Notorious B.I.G. Statue In The Works For New York

Brooklyn, N.Y. – The Hip Hop Hall Of Fame Museum is working to bring a memorial statue of Christopher Wallace, better known as The Notorious B.I.G., to Brooklyn, New York.

The organizers hope to place the statue at Putnam Triangle Plaza in Clinton Hill, near where the late rapper grew up in the Bedford-Stuyvesant neighborhood of Brooklyn.

The six-foot-tall sculpture of the legendary rapper’s face was created by Brooklyn-based artist Tanda Francis, and was recently shown at a gallery in the borough.

The Hall Of Fame Museum is raising money through a $35,000 public crowd-funding campaign to pay for the statue’s design, the bronzing, and the process of getting approval for its installation from the community board and City Council.

Wallace was killed at the height of his career in a drive-by shooting while in Los Angeles in 1997 and was a figurehead for East Coast rap music and the violence that can come with high-profile rap beefs.

Despite Hip Hop’s popularity in New York and around the world, official monuments celebrating its history are still relatively uncommon.

New York recently honored another late Hip Hop legend, renaming a street in Brooklyn’s Park Slope neighborhood Robert “PH” Diaz Way for the rapper who was once known as Pumpkinhead.

There’s also a memorial statue of Tupac Shakur standing in Stone Mountain, Georgia, at the Tupac Amaru Shakur Center for the Arts founded by his mother Afeni Shakur, who died last month. The center closed in 2014, but the statue is still visible from a distance.

Eminem was immortalized in clay in 2015 by a 23-year-old fan in Poland.

And in England, a 2013 petition to install a statue of grime rapper Wiley near where he grew up in East London amassed 5,000 signatures, though it seems the campaign didn’t lead to an actual sculpture.