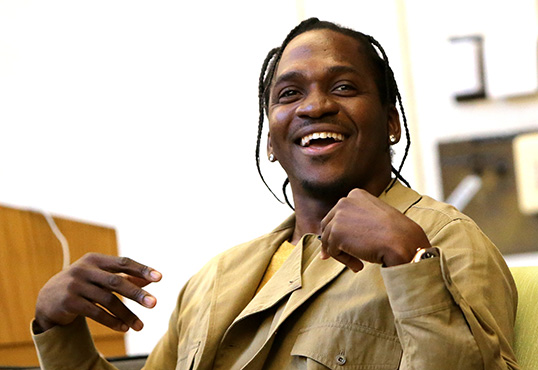 New York City, N.Y. – Pusha T’s “Drug Dealers Anonymous” track with Jay Z has been racking up streams online, but he also apparently stayed anonymous for what is most likely his most popular song.

Reflecting on the advertising campaign that his ad company Transition put together for the fast food franchise, Stoute corrected host Ebro Darden when he said the song was written by Neptunes producer Pharrell Williams.

“Pusha T [wrote that],” he said. “That’s crazy that Pusha T wrote the song for McDonald’s.”

The song was first recorded by Justin Timberlake in 2003, and the writing credits are listed as Pharrell Williams, Tom Batoy, Andreas Forberger and Franco Tortora. Pusha T’s real name (Terrence Thornton) is nowhere to be found.

A 2003 article from Billboard says the song was “produced by superstar duo the Neptunes and the Clipse,” which is Pusha’s old group.

The jingle and tagline was McDonald’s first global marketing campaign, appearing in more than a hundred countries, and netting Timberlake an estimated $6-million payout.

It seems like King Push scored too, at least according to a tweet that shows he is clearly still lovin’ it.

Here’s the version of the song with Pusha on it:

Check out the full interview below. The quote in question comes at around the four-minute mark.