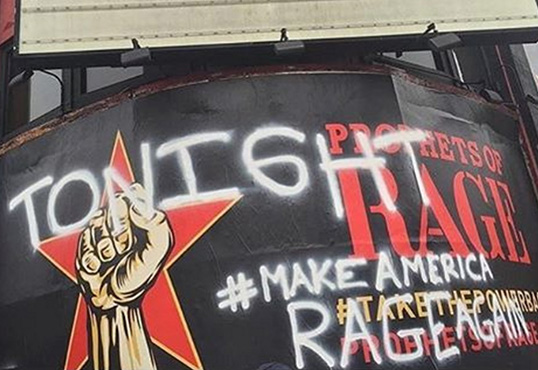 After a cryptic marketing campaign that had some Rage Against The Machine fans expecting a full reunion, Prophets Of Rage have shone some light on the group’s official members.

The group consists of Tom Morello, Tim Commerford, Brad Wilk, Chuck D, B-Real and DJ Lord, according to an announcement on their website.

The website, which until today (May 31) had shown a timer counting down, now reads: “We can no longer stand on the sidelines of history. Dangerous times demand dangerous songs. It’s time to take the power back.”

Morello, Commerford and Wilk all played together in Rage Against The Machine, as well as in the Chris Cornell-fronted band Audioslave from 2001-2007.

Chuck D is the frontman from legendary rap group Public Enemy, and DJ Lord is a renowned turntablist who has been with the group since 1999, replacing Terminator X.

B-Real is the California-based rapper from the multi-platinum selling group Cypress Hill.

Morello said that the music would have a political message.

“Dangerous times do demand dangerous songs,” he explained. “This historical moment is really unprecedented. Both the country and the world are on the brink of the abyss. And, we thought it was wholly irresponsible of us to be sitting on the sidelines when we have a catalog of material like we do between the three of us to go out and fight the power, to take the power back, to bring the noise, to rise up, to use four songs that we may or not be playing tonight.”

The band also addressed the absence of Rage singer Zack de la Rocha, saying that they’d spoken to him about the new group and that he gave his blessing.