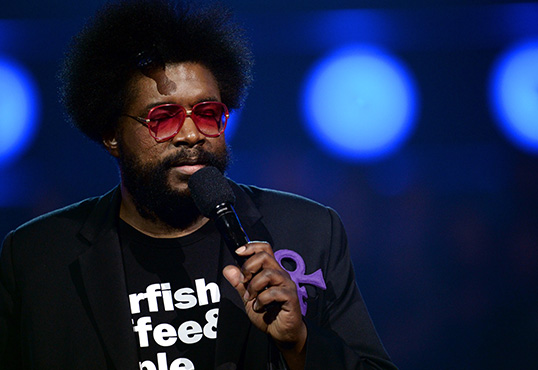 Questlove has been one of the most outspoken voices honoring Prince and the late pop superstar’s importance to Hip Hop, penning a full article about the topic for Rolling Stone magazine and introducing Madonna’s (poorly received) musical tribute at the 2016 Billboard Awards on May 22.

The Roots drummer recently listed dozens of ways the “Purple Rain” singer fit into the rap landscape in a lengthy caption of a photo of The Source’s Prince-inspired cover.

1. Came from troubled home.
2. Limited access to music forces him to create his own world of music.
3. Overcame poverty.
4. Creates fictional background tales to keep the press guessing.
5. Lives by the DIY creed.
6. Takes fashion taboos and makes them mainstream and acceptable.
7. Cock blocks and steals your lady on the low (ask Rick).
8. Puts his crew on—get them deals and makes them stars.
9. Pretty much wrote the book on gettin some better than any of his contemporaries.
10. Had beef with his peers who hated on him.
11. Invented the remix (not disco edits, but reimagining the album version).
12. Played mystery card—let us think what we wanted—gave the press middle finger.
13. Ghostwrote for everyone.
14. Used mad aliases.
15. Refused to be ordinary and eschewed the proper English language as a ways two communicate.
16. Knew the B side wins again and again.
17. Used the exotic honey to his advantage.
18. Used his music to give his views on the po po, politicians, gun control, war, God, squares and “the man.”
19. Turned a long music video into a revolution.
20. Best drum machine programmer ever.
21. Used synthesizers as a way of life.
22. Could make an entire album in less than a week.
23. Balled so hard in Paris and other parts of France—so he made a film about it.
24. Cut his crew off and got a new crew.
25. Went all hippie like it was nothing.
26. Made dis records.
27. Never wifed em, mostly replaced em.
28. Started his own label.
29. Parental Advisory was invented because of him.
30. Made a black album with a chip on [his] shoulder to prove he was still bad.
31. Plays sports better than you.
32. Had mad songs in the stash.
33. Had an MTV mansion/compound long before anyone did.
34. Changed looks constantly.
35. Droped music on the net in record time.
36. Looked out for his peeps on the low doing benefits and raising like a modern day Robin Hood.
37. Tries taking on the man for his complete freedom.
38. Couldn’t tell him NOTHING.
39. Always escaped into thin air.
40. Left us too early.