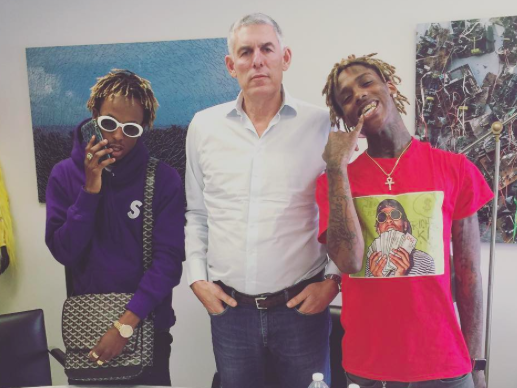 The Chicago native joins an impressive roster which includes Fetty Wap, Young Thug, Migos and Tate Kobang among other artists.

Rich the Kid, who is also signed to 300 Entertainment, recently added the “Drip From My Walk” rapper to his Rich Forever Music team. He also introduced him to 300’s bossman Lyor Cohen in April.

Yesterday (May 26), Dex shared a picture of him at the record label’s New York offices rocking a red 300 tee to match his signature dreads.

“I found uh Way to Take Care My Family,” he captioned.

300 Entertainment has yet to confirm news of his official signing, however he has been added to their roster on Wikipedia.

Although Famous Dex has not directly confirmed the news himself, he did take to Twitter today to announce that he will be among the many performers to hit the Summer Jam stage this year.

Check out Instagram posts of Famous Dex making moves below.

I found uh Way to Take Care My Family. ?