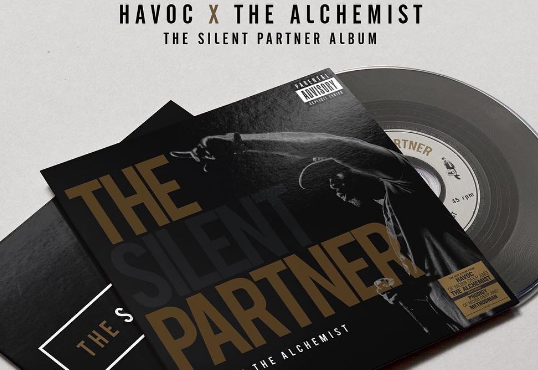 Los Angeles, CA – Havoc and Alchemist aren’t just cut from the same artistic cloth, they help construct the fabric that solidified both an East and West Coast Hip Hop sound many still hold dear to this very day. Today, May 19, HipHopDX is proud to exclusively deliver the stream for The Silent Partner, their first outing ever as a full-fledged group.

The newly formed duo’s union dates back to an introduction in 1999 made by Cypress Hill’s DJ Muggs, projecting Alchemist to score some invaluable tracks on Mobb Deep’s classic Murda Muzik as well as solo work by Prodigy.

Alchemist may appear to play the background vocally but make no mistake, his presence is felt through an ardent mix of meticulously picked soul samples, murky drum loops and bass amped high enough to make you step back and kiss your headphones.

After all they say, real G’s move in silence. Hold the lasagna.

The more versatile half of Mobb Deep shines with illustrated subject matter reinvigorated lyricism rare for a 20-year vet of the industry. Although he holds down the mic controlling duties by himself for much of the affair, longtime fans will be thrilled to know he split some studio time with some familiar faces in Method Man (“Buck 50 & Bullet Wounds”), Cormega (“Hear Me Now”) and of course, Prodigy (“The Gun Holds a Drum”).

The Silent Partner is currently available for pre-order on iTunes now via Babygrande Records.

Listen to the album in its entirety below. It’s Chemistry Beats and the H-A-V-O-C.