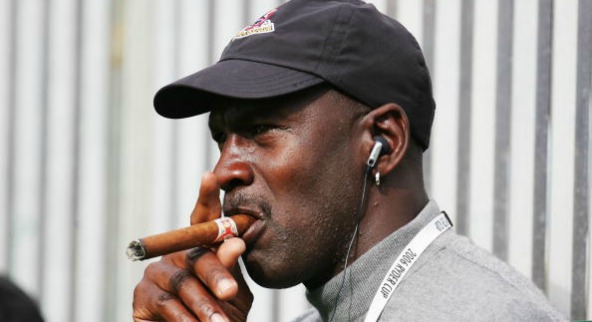 First there was the time when the Capone-N-Noreaga member claimed the late Big Pun walloped Jay Z with a champagne bottle (a claim that prompted to Jigga to cold call him the day after Thanksgiving) and now, there’s an alleged incident where he was at a Def Jam Christmas function where he overheard Michael Jordan scoff at the mere notion of socializing with rappers who weren’t in his tax bracket. (Or ones not named Jay Z.)

“[MJ] said, ‘Fuck rap.’ I seen the nigga say that…Quote me,” N.O.R.E. told the Rap Radar podcast, recalling how artists such as Method Man and Redman were waiting their chance to speak to the NBA’s G.O.A.T.

Jordan’s longtime rep, Estee Portnoy, felt the need to respond seeing that the story went viral across rap and sports publications alike and unsurprisingly, the Jumpman camp are calling bullshit.

“MJ wasn’t at this party, doesn’t know N.O.R.E., and is a fan of ALL music,” she tells TMZ before adding “Drake is in his brand, and Nelly is a partner of his with the Charlotte Hornets.”

This is the party I'm talking bout pic.twitter.com/67ASsnoKuZ

Jordan Brand has long been revered in the Hip Hop community and the mere mention of the logo can often field incredible results for rappers. “Jumpman” from Drake’s 2015 joint mixtape, What a Time to Be Alive, became Future’s highest charting single as a lead artist. Mike WiLL Made-It saw similar success with his 2013 “23” single with Miley Cyrus and Juicy J, reaching No. 11 on the Billboard Hot 100 charts. The platinum-selling producer also said he got phone call from the man himself shortly after the song broke.

That’s not saying N.O.R.E.’s story doesn’t fall in line with the reputation Jordan’s aura has sprinkled around the Hip Hop community, either. Several years ago, Chamillionaire posted a now infamous vlog where he claimed the basketball icon disrespected him and Yung Joc at an event.

Earlier today (March 25), N.O.R.E. visited Angie Martinez’s Power 105.1 podcast to promote his new project, Oh No! It’s…Drunk Uncle and doubled down on his version of the story and tweeted out, “I have nothing but time to keep responding to this.”