Just Blaze Analyzes The Psychology Of Music While Discussing Fightball 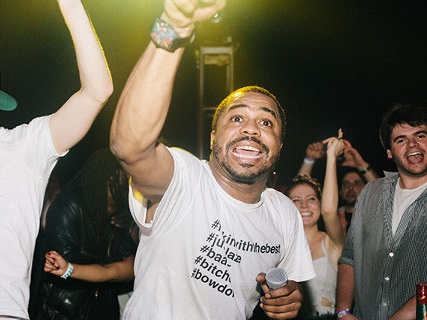 Just Blaze analyzes the psychology of music while discussing his contributions to Fightball soundtrack.

New Jersey producer Just Blaze is one of a handful of artists who have lent their musical expertise to Fightball, a MMA/basketball hybrid. Unlike your typical sporting event, Fightball features intense one-on-one basketball competitions, in a club-like setting.

While speaking on his musical contributions to Fightball, which consisted of a handful of tracks, Just Blaze briefly broke down the psychology of music. He went on to explain that he wanted the aggression present in Fightball to be reflected in the music he created.

The beatsmith later revealed that he was encouraged to jump on board the project after receiving word that DJ Clark Kent would also be involved.

“I have to give the audience the accompaniment to what they’re seeing…And I have to give Clark the tools he needs to be able to do that,” he said. “You know what I mean? Clark, he’s an amazing deejay and great producer. For me, that was definitely one thing that led me to say ‘okay’ because all this stuff has to happen on the spot. You gotta have somebody who understands how to hit those beats and those cues. So, Clark was a great choice for that.”

In addition to one-on-one basketball competitions, Fightball also features live performances. A$AP Ferg, Cam’ron, and Pusha T are among the artists who have performed at the event.

Most recently, in a championship that was described as “intense,” a handful of one-on-one matches took place last Thursday (March 10) to crown the Fightball Spring Season 2016 Champion. In the end, Andrew “SpongeBob” Washington beat out Leandro De Lima, and walked home with $100,000.

Video of Just Blaze speaking on his musical contributions to Fightball, can be found below.