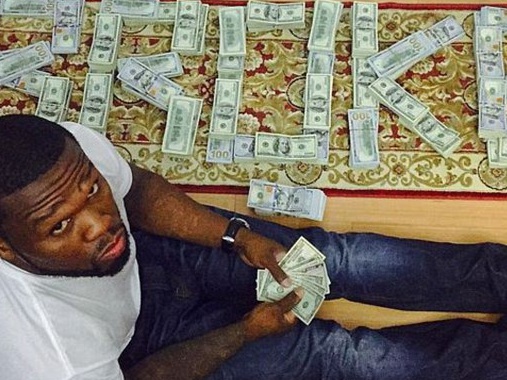 50 Cent reportedly has $64 million in assets, $10 million in checking and stocks.

Bankruptcy reports recently obtained by the Daily Mail show how much rapper 50 Cent has in assets, checking, stocks, and more, after filing for bankruptcy.

According to the Daily Mail, appraisers looked into Fifty’s finances after he claimed to have only $16 million in assets. They discovered that the G-Unit helmsman has $64 million in assets and thousands in home goods and jewelry.

“Last month, he filed documents in the bankruptcy stating he only had $16 million in assets,” the Daily Mail reports. “However, it appears appraisers checked into it all – and found his assets
total over $64 million and that he only has liabilities totaling more than $36 million. In addition, 50 Cent’s current monthly income is $184,000-plus. The appraisers also valued his home goods to $131,000 including $49,000 in jewelry alone. Appraisers found he has over $10 million in checking and stocks as well as his various G-Unit and other business’ which are worth over $44 million.”

Additionally, the bankruptcy judge in 50’s case has expressed concern over the various photos the rapper has posted to Instagram, which show 50 with large amounts of money.

“I’m concerned about allegations of nondisclosure and a lack of transparency in the case,” bankruptcy judge Ann Nevins said at a hearing in Hartford, Connecticut, according to the Daily Mail. “There’s a purpose of having a bankruptcy process be transparent, and part of that purpose is to inspire confidence in the process.”

50 Cent filed for bankruptcy last June after being struck with a lawsuit from Lastonia Leviston. Years ago, 50 posted a sex tape of Leviston, who has a child with rapper Rick Ross, online.

Leviston was awarded $5 million, and later an additional $2 million, as a result of her lawsuit.

50 Cent previously revealed to HipHopDX that he filed for bankruptcy during the trial to ensure that he’s “not taken advantage of.”