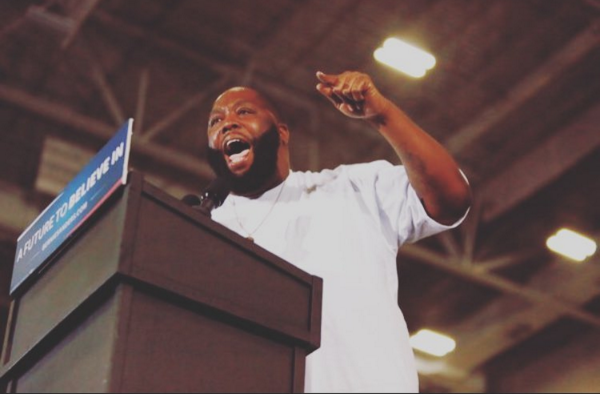 Throughout his speech, the Atlanta rapper heavily criticized fellow Democrat nominee Hillary Clinton for her record on race, particularly referencing the way in which a young #BlackLivesMatter activist was treated after confronting Clinton at a private fundraiser in Charleston, South Carolina on Wednesday, footage of which can be viewed below.

Killer Mike subsequently compared Clinton’s reaction to that of Sanders, who, back in August, was interrupted by a #BlackLivesMatter rally in Seattle. Unlike Clinton, who quickly quelled the small protest, Sanders moved to one side and allowed the activists to speak and voice their opinion.

“When you have an opportunity to tell two Black girls to ‘shut up and get off stage’ and you don’t, and you shake their hand and smile and you step to the side and you listen, that is a firm difference from turning around and staring at a little Black girl and saying, ‘Shut up. I’ll talk to you later. You’re being rude.’ Or allowing people to say that to her,” Killer Mike said.

“I’m gonna tell you, the proof is in the pudding every time,” Killer Mike continued. “If I could find a picture of you from 51 years ago chained to a Black woman, protesting segregation, and I know 51 years later you’re willing to fold your arms, hold your head, and listen to two Black girls yell and scream, rightfully so, as opposed to someone who will tell you to ‘shut up’ after they read your own words, as opposed to someone who will tell you ‘later’ when it comes to your children dying in the streets, I know that the only person that I have the conscience to vote for is Bernard Sanders. I know that the only person that my logical beautiful Black mind will allow me to vote for is Senator Bernie Sanders. And I want to tell the other side, I know from going around and shaking hands and hugging these beautiful Black faces of South Carolina, that goddamn firewall got a crack in it.”

Killer’s Mike’s powerful speech in South Carolina, whereby he slams Hillary Clinton’s record on race, can be viewed below: