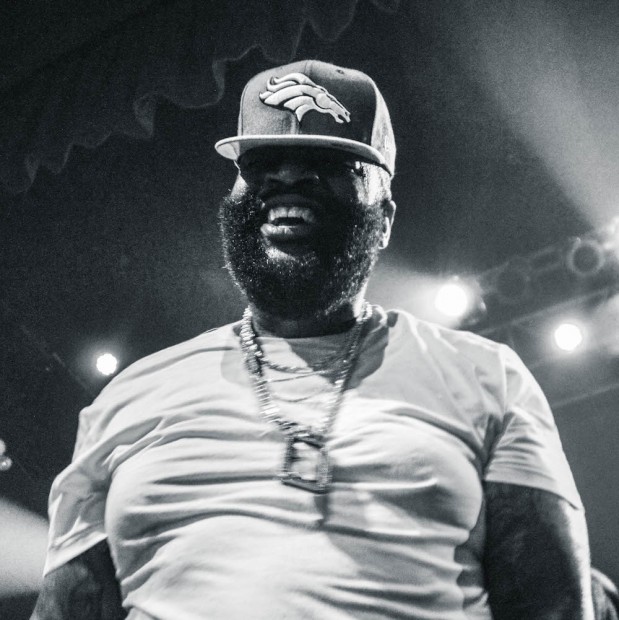 Rick Ross helped the Denver Broncos celebrate its Super Bowl win with a concert yesterday (February 9) at the Gothic Theatre. Earlier in the day, the team held its championship parade through the streets of downtown.

Ricky Rozay came on stage at about midnight wearing a blue Broncos hat. He was joined by Broncos cornerback Chris Harris Jr. and Super Bowl MVP Von Miller, who were hosting the event. Ross congratulated Miller on his title and the player mockingly did Carolina Panthers quarterback Cam Newton’s signature Superman shirt pull and then dabbed. Several other players partied on stage with the Maybach Music Group rapper, including Shane Ray, Aqib Talib and TJ Ward.

Ross performed a selection of songs including “Blowing Money Fast,” “Pop That” and “John.” He interpolated the Broncos into some of his lyrics. For example, when performing “I’m On One,” he inserted Denver into the line where he raps “Ever made love to the woman of your dreams / In a room full of money out in Denver while she screams” and then “We on one, the feeling ain’t fair / And it’s Broncos until I get the chair.”

After a handful of Ross songs, the rapper and players partied on stage. They sprayed champagne into the crowd, danced and took photos while a deejay played popular songs such as Future’s “March Madness,” Rich Homie Quan’s “Flex” and Tupac’s “California Love.”

DJ Squizzy Taylor and Denver rapper Pries opened for Ross. DJ Squizzy Taylor, who works with Trev Rich, played a set that featured Future’s “Fuck Up Some Commas,” Yo Gotti’s “Down in the DM” and Drake’s “Back to Back.” Trev Rich was also in attendance.

Pries performed a Fetty Wap song and then went into his own work. He led multiple “Bronco Gang” chants throughout his set.

The Broncos defeated the Panthers 24-10 to win Super Bowl 50 Sunday (February 7). It is the team’s third championship title.

TIP performed in the city after the Broncos won the AFC Conference Championship, garnering the team its eighth Super Bowl appearance, tied for most all-time.

View photos of Rick Ross celebrating the Broncos Super Bowl win with a concert in Denver below: