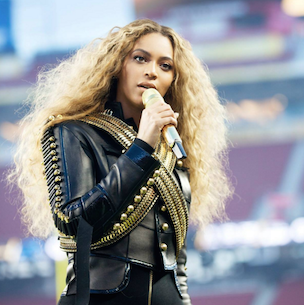 Beyonce explains the message of her “Formation” single after performing the cut during her Super Bowl halftime set.

“It makes me proud,” Beyonce says during an interview with Entertainment Tonight. She performed the song for the first time yesterday (February 7) at halftime of Super Bowl 50. “It’s what I wanted,” she adds. “I wanted people to feel proud, have love for themselves.”

On Saturday (February 6), Ebro, an on-air personality for New York radio station Hot 97, dissed “Formation,” which is produced by Mike WiLL Made-It and co-wrotten by Rae Sremmurd’s Swae Lee.

“They didn’t write that shit,” Ebro said at the time, alleging that the duo use ghostwriters. “Any of it. Maybe some of it. Mike WiLL-Made It—you know that his name is Mike WiLL-Made It? He made that album. They’re Kriss Kross. It was a fabricated thing that we all liked.”

Rae Sremmurd’s Slim Jimmy said that the Hot 97 anchor “is not relevant” and Mike WiLL Made-It said Ebro is “lame as hell.”

As for her Super Bowl performance, which included her delivering a solo set and joining in with Coldplay and Bruno Mars, Beyonce was pleased.

“It felt great,” she said. “The best part was seeing Coldplay, for me ’cause I was able to watch from the back and really enjoy it.”

The interview with Beyonce, who explains the message of her “Formation” single after performing the cut during her Super Bowl halftime set, is as follows: