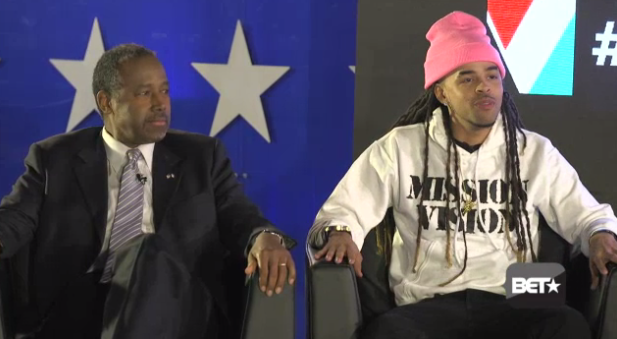 Last week, Stacey Dash riled the masses when she blatantly called for an end of pro-Black media such as BET and the NAACP Image Awards. The Clueless actress was directly responding to the outrage regarding the Academy Awards second consecutive year African-American actors were omitted from any sort of recognition and the FOX News pundit made it quite clear where her loyalty resided.

During a BET-hosted, Town Hall style interview at the Iowa caucus, the always prolific Dee-1 joined Republican presidential candidate Ben Carson and Vote America Now President Chris Prudhomme to discuss why Dash may have felt the need to have thoughts that many deem as self-hatred for her own black skin.

Dee-1, the Louisiana artist who has carved a niche in Hip Hop culture for being more lyrical than lavish, admitted that he grew up thinking the seemingly ageless actress was attractive but summarized the feeling that beauty doesn’t equate to brains.

“I was highly upset when I heard [Dash’s comments],” Dee-1 said before adding she utilized “a poor of choice of words.”

“I feel like [her comments] were largely hypocritical because Stacey Dash has earned several checks from BET. I realize now that I’m older and am an adult that just because someone looks good, doesn’t mean they’re a good spokesperson for our people.”

Carson agreed with his rapper colleague while also attempting to speak for the clearly articulate Dash saying, “I know Stacey, she’s a friend…and that did not come off exactly the way she meant,” he began. “I think what she was trying to say is ‘I wish we were at a stage where it wasn’t necessary to have a black station or black awards, but you know we’re not there.’ That part she didn’t add.”

Despite their mutual sentiments on the matter, Dee-1 did hit Carson off with a few tough questions including analyzing the relationship between race, socioeconomic class, and financial independence.

“Where do you get the money, to become financially independent, when you come from generational poverty?,” he asked.

Carson, 64, is a decorated retired neurosurgeon whose autobiographies and memoirs depicted him as poverty-stricken black youth who found a way to rise above his dire Detroit upbringing, but even he hasn’t found an answer as to how all inner-city kids can put his success into play.

Watch as Stacey Dash becomes a topic of conversation ahead of the Iowa caucus kickoff via the video below.