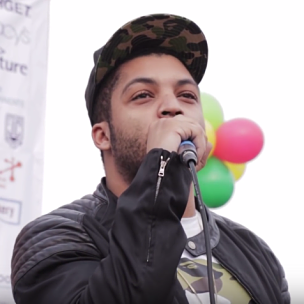 The actor made the assertion during a recent speech at L.A. Works’ 11th Annual Martin Luther King Day of Service, which took place this past Monday (January 18).

“Straight Outta Compton, I don’t know if you seen it, but Straight Outta Compton speaks to the underdogs,” the actor, who portrayed his father Ice Cube in the 2015 biopic, said during the speech which took place at Woodcrest Elementary School in South Los Angeles. “The people who may have been told that their dreams are pointless or that they can’t aspire to be what they wanna be. They proved them wrong, [Ice] Cube, Eazy, [Dr.] Dre, [DJ] Yella, [MC] Ren they all proved them wrong, all [of] the doubters. And that’s something that all of us here today need to take in in whatever it is you do. You can’t be mad at anybody who doubts you. The people that doubt you, they just don’t know. They’re ignorant to the knowledge of what is you. You gotta inform them. You gotta be the one to show them, ‘I know what I got and I know where I need to be.’

“Showing growth in movies like Straight Outta Compton promotes growth,” he continued. “If people of color are only supposed to be thieves or gang members in movies then what else can we inspire to be? They don’t tell you that the person who invented the X-ray microscope was a Latino man or that the man who pioneered open-heart surgery was a black man. There are stories of triumph out there that need to be shown to the inner city and to people who feel hopeless. I’m here to tell you that everything that you need is already in you, you just gotta figure out how to pull it out of you.”

O’Shea Jackson Jr.’s speech, whereby he asserts that movies like Straight Outta Compton help to promote growth, can be viewed below: