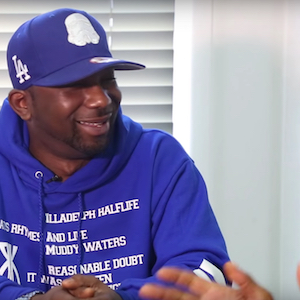 Ras Kass released his Lyrical HipHop Is Dead mixtape on Tuesday exclusively though HipHopDX but that isn’t stopping him from working on even more new music.

Recently sitting down with Planet Asia at DX Headquarters, the Watts, California native also detailed his next collaborative album called Breakfast At Banksy’s with Jack Splash.

“For those who don’t know Jack Splash is a producer based out of Miami but he’s actually from L.A.—more funk and soul, like Alicia Keys, CeeLo Green-type stuff,” Kass relayed when asked about the project. “We came together and did an album and collectively we are called Semi Hendrix. Funk is not something I would pick to rhyme over, so it was a fun challenge to step out of my comfort zone and just do something that was dope and was different.”

Also during the interview Ras Kass talked about his new clothing line and what he’s planning on in terms of touring. Since there’s a live band element to performing with Splash, he explained how it’s harder to put an actual tour together cohesively. He’s working on it though.

Watch the full interview segment with Planet Asia and Rass Kass below: