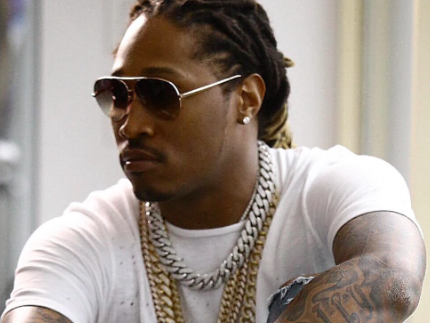 Future Reveals Why He Always Raps About Drugs In His Music: "It's A Catch"

Drugs might be the topic of choice for a majority of Future‘s music. However, in a recent interview with French website Clique, the “Codeine Crazy” rapper reveals that even though his music might portray that kind of lifestyle, in reality he’s not always high.

The 32-year old Atlanta rapper says the reason why he raps about drugs so much is because that is the number one thing that people want to hear.

“I feel like that’s the number one thing everybody likes to talk about. It’s a catch,” he says  in the interview published on Friday (January 15).

“I’m not like super drugged out or a drug addict,” Future Hendrix continues. “My music may portray a certain kind of image and I know it’s some people that might be super drugged out and they listen to the music like, ‘Ay thank you, you speaking for me’ and then some people that’s not that feel like, ‘Man I don’t have to do drugs, I can listen to Future and feel like I’m on something’ and don’t have to try it. I don’t do it for you to really have to live that type of life.”

Elsewhere in the interview, the Purple Reign rapper shares that he just closed two major endorsement deals while in London, which would not have been possible if he was on drugs all the time.

“I’m talking boss talk. ” Super Future says. “I’m talking big endorsement deals. I’m talking about some of the big endorsement deals no matter what I am. I get the calls everyday. I’m closing deals everyday that don’t have nothing to do with drugs. I didn’t have to be on drugs to go to these meetings. I didn’t have to close these deals to be on drugs. They just see what they get. They don’t see this Nike deal that I just did. They don’t know about this Rolex deal I just closed today.”

The full Future interview with Clique is as follows:

For additional coverage on Future who reveals why he always raps about drugs, watch the following DX Daily: