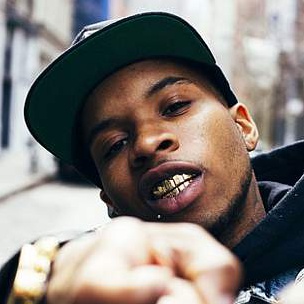 According to singer Tory Lanez, he’s on the path to becoming “one of the biggest” artists in 2016.

The Canadian crooner made that particular declaration during a “Show & Prove” feature in XXL magazine’s winter 2015 issue. 2016 will also serve as the year Lanez is scheduled to release his currently untitled, debut album.

“In the next year, I’m going to be one of the biggest. Nothing is going to stop that,” Tory Lanez said.

During his interview, Lanez, who has lived in Atlanta, New York, Miami, and Toronto, also recalled bouncing from city to city, and eventually finding himself living with a group of strangers in Toronto. He says it was a living situation that forced him to fend for himself.

“I ended up moving downtown with these three dudes that I didn’t really know,” he said. ”I came into the house and I didn’t realize how things worked. From like 15-18, I was just fighting them. I fought like every day and these were like older dudes. It was every man for himself. That’s what made me a man, having to fend for myself and being in a situation where there is no dad, no grandma and no mom to help you. It changed the person that I am today.”

In the time since Lanez inked a deal with Sean Kingston’s Time Is Money Entertainment, which he’s no longer signed to, he’s had the opportunity to work with a handful of artists including Meek Mill and YG.

During an interview with HipHopDX last month, Lanez spoke on working with Meek Mill on the rapper’s last album.

“It was incredible,” Lanez said. “For me, I did the ‘Lord Knows’ record. It’s crazy, I was actually gonna throw away that record. I personally didn’t like the record until Meek went on it. I thought it sounded too much like my other records. That’s why I was like, ‘I should probably just give it to somebody else.’”