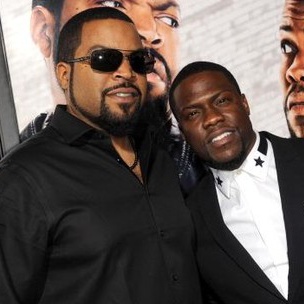 Ride Along 2 stars Ice Cube and Kevin Hart recently appeared on an episode of “The Bachelor.”

On an episode of ABC’s “The Bachelor,” which aired yesterday (January 11), contestants were treated to a surprise appearance from actors Ice Cube and Kevin Hart. The two tagged along with “The Bachelor” star, Ben Higgins and his date on an outing to a spa outlet.

In a behind the scenes interview, Hart jokingly referred to Higgins as “stupid” for allowing them to join him on his date. He also recalled eating nothing, but Doritos on the first few dates with his fiancée.

“It’s very stupid for him to allow us to join him. It was very stupid…First three dates we ate Doritos. It was nothing, but chips the first few dates,” Kevin Hart said.

Ice Cube then offered his thoughts on Hart’s frugalness while dating.

“Kevin is rich. Kevin has a lot of money. And for him to still be suggesting cheap dates lets you know that he’s always going to stay rich,” Ice Cube said.

Both Ice Cube and Hart star in Ride Along 2, which will be released in theaters on January 15.

Video of Ice Cube and Kevin Hart appearing on “The Bachelor,” can be found below.