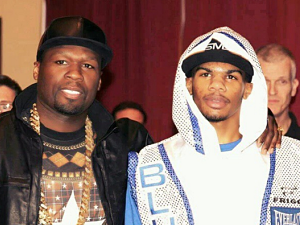 50 Cent is about to have one less headache from his SMS Promotions boxing company as the Jasmine Brand reports that the rapper has reached a settlement with Ryan Martin.

In the settlement, which was filed Tuesday (March 15), Martin is freed from his contract with SMS Promotions. The agreement says SMS Promotions and 50 Cent will receive 20 percent of all gross earnings for any fight Martin participates in over the next three years. The rapper will also receive the same percentage cut for any signing bonus or sponsorship deal that Martin garners.

The boxer, who signed with SMS Promotions in 2013, confronted 50 Cent in September when he filed documents in the promotions company’s bankruptcy filing demanding to have his contract voided. The company threatened to take Martin to court, denying that they treated him unfairly and saying that they got two of his 14 fights to air on ESPN and featured Martin in one of 50 Cent’s music videos. SMS Promotions filed for bankruptcy in May.

50 Cent’s SMS Promotions are set to take one of their clients, lightweight boxer Ryan Martin, to court after the boxer attempted to have a bankruptcy judge void his contract with the company.

According to reports on theJasmineBRAND.com, Martin filed documents on September 30 demanding that a judge void his contract.

“Martin said he entered into a contract with 50’s company back in 2013, where SMS Promotions promised to market and promote him as a professional boxer and hold 20 bouts for him over 5 years,” theJasmineBRAND.com reports. “Per their deal, Martin agreed to work exclusively with SMS and not sign with any other companies.

“He said that since the deal was signed, SMS has only coordinated and promoted 1 bout for him,” the publication continues. “Martin blasted 50’s company saying they have failed in every aspect as a promotion company by not marketing him as a sports personality and failed to develop him into a superstar.”

In May, SMS Promotions filed for bankruptcy. Since then, Martin reportedly claims that the company hasn’t done “a single thing for him.”

On October 15, SMS Promotions fired back at Martin’s filing.

“50’s company says Martin has fought in a total of 14 fights since he signed with them, well over the 11 bouts the contract stated he would and more than most fights his age have fought. They say they have spent countless hours promoting Martin in the boxing world. SMS points out 2 of his fights were even broadcast on ESPN. Further, he was even featured in one of 50 Cent’s music videos as promotion. SMS claims they offered Martin a fight as recent as this month, but he refused since he is attempting to get out of his deal with them. 50’s company blasts the boxer’s claim they breached their contract and SMS is demanding his contract not be voided in the bankruptcy case.”